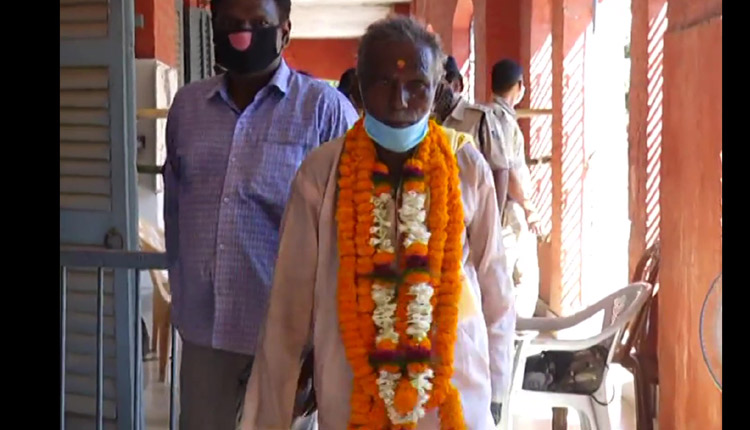 Balasore: Even at an advance age of over 90 years, Benudhar Barik from Ward No. 21 of Gudipada in Balasore has not given up hopes of bringing about a social change through electoral politics. This nonagenarian recently filed his nomination as an independent candidate for the upcoming by-election to the Balasore Sadar Assembly Constituency with desire to fulfill his long-cherished dream of empowering the downtrodden.

“After over 73 years of Independence, all the three categories of backward classes have been recognized, including SCs, STs and OBCs, but their economic deprivation still continues,” said Benudhar while speaking to OTV.

A barber by profession, Barik aims to represent his village as an elected MLA from the Balasore Sadar Constituency to support the poor and the downtrodden by raising their issues and concerns in the Vidhan Sabha.

“Candidates from established parties have more chances of winning the election on account of their money power, but as he has taken up the cudgel to fight for the economically backward people, we look forward to support him and are proud of his decision,” said a local from Gudipada village.

“We believe everybody will support him as he has stood with us and has provided us with complete support in difficulties that we have faced despite his age,” said another woman voter from the constituency.

This is for the first time that Benudhar has put his candidature from the Balasore Sadar constituency challenging the mighty rivals from BJD, BJP and Congress.

Locals claim, that he visits people of the ward regularly, and appeals to them for their support, through his speeches and motivating talks. In between his campaign trail, Benudhar takes time out for his family occupation by providing haircuts and shaves to his customers.

Benudhar, through his speeches, exhorts youngsters of his village to quit alcohol and other vices and look forward to build a bright future.

Collector Discovers Engineer Working As MGNREGS Labourer In Odisha; Read What Happens Next