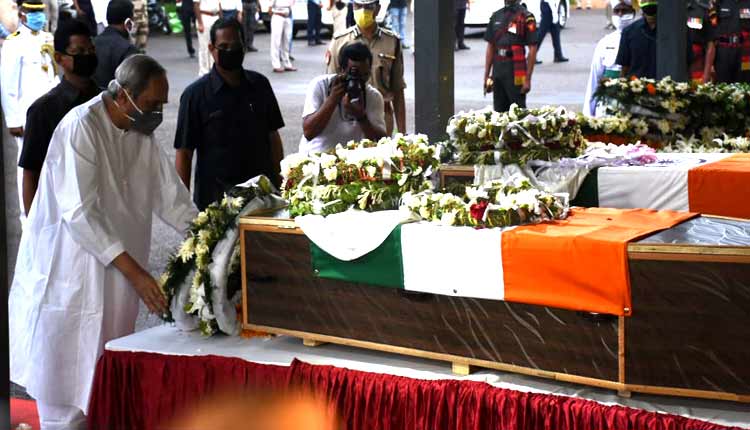 Bhubaneswar: Wrapped in Tricolour, the mortal remains of two jawans from Odisha, who were martyred in the violent clash with Chinese troops in Galwan Valley in Ladakh, reached Bhubaneswar on Thursday.

The mortal remains reached the Biju Patnaik International Airport in Bhubaneswar in a special aircraft.

A guard of honour was given to the martyr jawans- Chandrakant Pradhan from Biarpanga village under Raikia block of Kandhamal district and Nuduram Soren from Rairangpur of Mayurbhanj district.

Both Pradhan and Soren were among the 20 Indian army personnel who were martyred in the violent clash with Chinese troops in Galwan Valley along the Line of Actual Control (LAC) in eastern Ladakh on Monday.

As per official sources, Soren had joined the 16 Bihar regiment in 1997 while Pradhan was posted as a sepoy with the same regiment for the last six years.

Earlier, Odisha Chief Minister Naveen Patnaik had expressed grief over the death of two Odia jawans in the violent face-off with Chinese troops along the LAC. Patnaik also announced an ex-gratia of Rs 25 lakh each to the next of the kin of the two jawans. He also praised the bravery and courage of the two martyrs who ‘made supreme sacrifice for the motherland.’