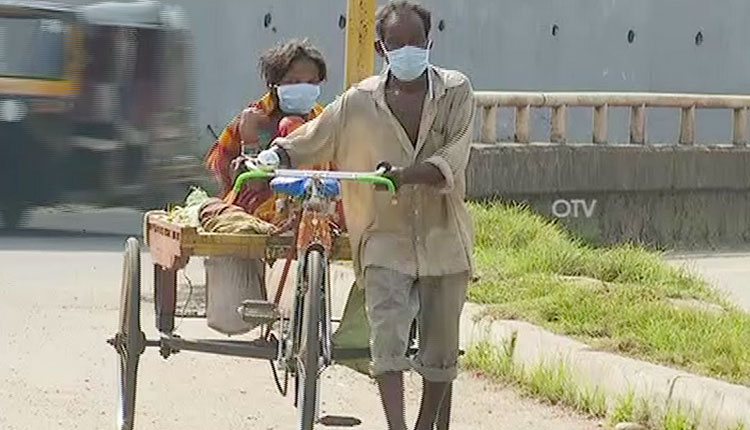 Cuttack: A man from Sakhigopal area of Puri district paddled his sick wife for around 90 kms from Puri to Cuttack on a rented trolley rickshaw after he failed to hire an auto-rickshaw to take her for treatment at SCB Hospital due to lack of money.

The incident reported on Saturday has now become the talk of the town. Identified as Kabir Bhuin, a resident of Puri had admitted his wife Sukanti at the local district headquarters hospital ten days back. The doctors at the DHH advised him to shift his wife to SCB Medical in Cuttack as her health condition continued to deteriorate.

Later, Kabir brought her back home as he was having no money to shift her to Cuttack hospital.

However, when Sukanti’s health worsened yesterday, Kabir hired a trolley rickshaw at Rs 50 per day and paddled all the way from Sakhigopal to Cuttack.

The couple was spotted near OMP square here by some social activists and OTV team, who helped Kabir in admitting Sukanti at SCB Hospital.

“I feel very weak and my appetite has also decreased. As my husband was having no money to hire an auto-rickshaw, he paddled me all the way from Sakhigopal to here on the trolley rickshaw,” said Sukanti.

While narrating his ordeal, Kabir said “I tried to arrange an auto-rickshaw for my wife but they demanded Rs 1200 to drop us to Cuttack. Having no other alternative, I hired a trolley rickshaw and brought her to the hospital.”

“I have been suffering due to Sukanti’s health since the last one year. This time the journey was painful and tiring, I hope she will get better treatment in SCB,” added Kabir.

Social worker Abhimanyu Das who helped the couple, informed that Sukanti’s hands and legs have swelled due to which she is not able to walk.

SCB authorities have said that Sukanti has undergone several tests and she will be soon shifted to hospital ward from the casualty.