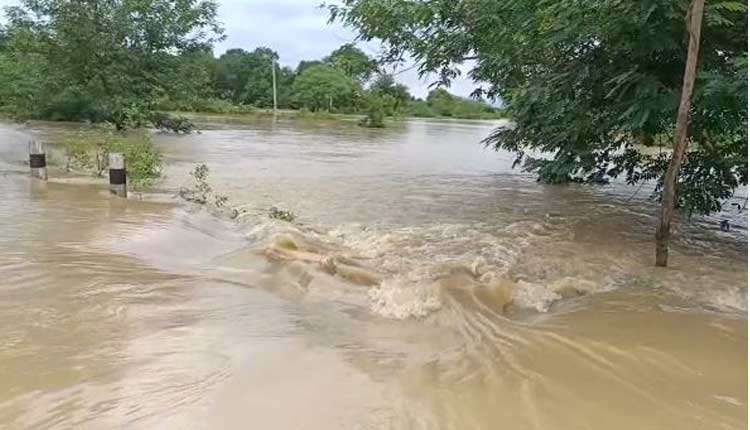 Dehenkanal/ Bhadrak/ Malkangiri: Incessant rain triggered by a low pressure over the Bay of Bengal has thrown normal life out of gear in many parts of the State. Dhenkanal, Bhadrak and Malkangiri districts have been the most-affected with the heavy rainfall leading to a flood-like situation.

According to reports, Kamakhyanagar sub-division in Dhenkanal district remained inundated as heavy rain continued to lash the district. While many kutcha houses were reportedly damaged, dozens of trees were uprooted due to the rain blocking road communication. Vehicular movement on many routes has been affected in the district as several roads and bridges were submerged in the continuous downpour. Excess rainwater is flowing four-five foot above the Damasala bridge snapping communication between Bhuban and Kamakhyanagar in the district.

Similarly, four villages under Bhuban block remained cut-off after Dhonei bridge was submerged in rainwater. Moreover, many parts of the block were flooded after Nilakanthapur culvert was washed away causing a 40-foot breach. Interestingly, the culvert was constructed last year.

Similarly, the situation in Bhadrak remained grim due to continuous downpour. Many government offices including the office of the Block Educational Officer (BEO) in Dhamnagar block and Notified Council Area (NAC) office were flooded.  While acres of agricultural land went under water, vehicular movement on many routes was affected due to the rain.  Four panchayats in Bhuban block remained cut-off as rainwater continued to flow knee-high over road connecting Dhamnagar and Biruhan.

Moreover, eight houses in Habib Nagar of the district collapsed following which Fire department officials were rushed to the spot to launch rescue operations.

“Rainwater has entered our houses. Roads are under knee-high water. We request district administration to send relief to the affected areas,” said Sk Hamia, a Dhamnagar resident.

On the other hand, Malkangiri district continues to grapple with similar flood-like situation. While major rivers in the district are in spate; traffic movement on major routes has been affected. In a recent development, a major mishap was averted after locals rescued the driver and helper of a truck which met which got stranded while attempting to cross the inundated-Kankarakonda bridge in the district. According to reports, the mishap took place when the ill-fated truck was on its way to Malkangiri from Andhra Pradesh. The driver lost control and the truck got washed away in the floodwater while crossing the bridge.

Truck enroute to #Odisha from Andhra Pradesh swept away in floodwater near Kankarkonda bridge in Malkangiri. Locals managed to rescue the driver & helper from the vehicle. Water level in several rivers in the district has been rising due to incessant rainfall. pic.twitter.com/joEx9CtBJs

Many areas in the districts remain surrounded by floodwater due to heavy rain.