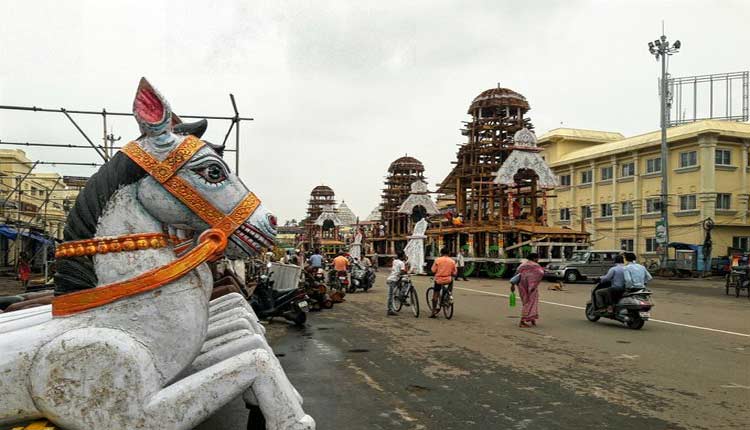 Puri: Ahead of their annual sojourn to Mausi Maa Temple, the Holy Trinity of Lord Balabhadra, Devi Subhadra and Lord Jagannath have finally recovered from fever after being offered a special herbal medicine- ‘Dasamula Modaka’ by the Raja Baidya at Puri Srimandir.

The Dasamula Modak was offered to the deities after the evening ‘dhupa’ rituals at around 2 am last night which helped the Lords to recuperate faster. The deities were adorned with colourful clothes and offered ‘tulasi’ as per rituals.

The divine siblings are still placed in the secret chamber ‘Anasara ghara’ where they had been recuperating from sickness following a grand bath with 108 pitchers of herbal-aromatic water on Debasnana Purnima.

As per traditions, the Daitapati servitors will visit Gajapati Dibya Singh Deb to inform him about the recovery of the Lords. They will carry dried sandalwood flakes from Lord Jagannath’s body along with the deity’s ‘patta’ clothes on a silver plate for the Puri king as a traditional practice.

The Supreme Court will hear a PIL filed by an NGO- Odisha Bikash Parishad seeking cancelation of the annual Car Festival of Lord Jagannath in the wake of rising cases of novel-Coronavirus cases in the State.

Sources said the State Cabinet which is set to meet today in the evening is likely take a decision on the conduct of the festival.

On the other hand, even though an uncertainty prevails over the conduct of Rath Yatra of the Holy Trinity, possibility for the festival continues to gather momentum with each passing day.

Several make-shift shopkeepers were seen vacating their establishments from Bada Danda near the 12-century shrine after the city municipal authorities’ order regarding the same. Similarly, the administration has also initiated preparations for installing barricades around the Grand Road thus strengthening hopes for the celebration of the festival.