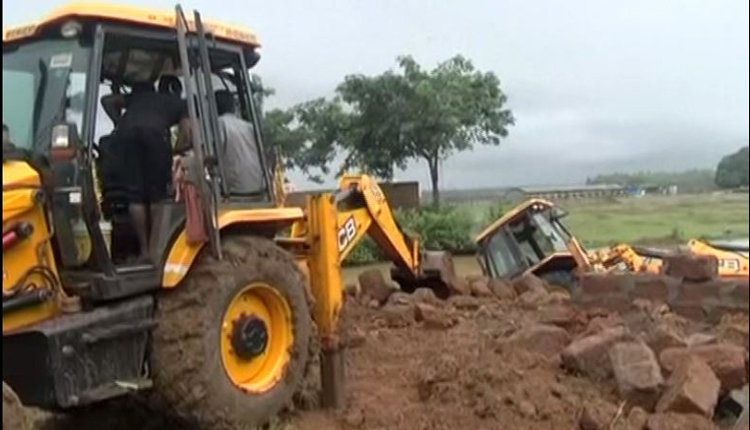 Bhubaneswar: The Khordha district administration on Wednesday began demolishing boundary wall of OTV’s Sarua CSR project without notice without issuing any prior notice.

According to Begunia Tehsildar Prithviraj Mandal, the demolition is being carried out on the ground that it will allow the natural flow of water into nearby agricultural land.

“We are demolishing the wall on an emergency basis as it is stopping water from flowing into agricultural land,” claimed Mandal.

Asked about pulling down the wall without any prior notice, the Tehsildar clarified that the action was taken to ‘avoid any law and order situation in the area’.

The Tehsildar further stated that only after the eviction drive is completed, details pertaining to the ownership of the alleged ‘encroached’ land will be shared.

Though Khordha sub-collector Ashok Beuria was present at the spot, he too was clueless as to why the eviction drive was being carried out without prior notice, who encroached the land, most importantly, at a time when a Crime Branch probe is underway.

“I don’t have all information about the alleged encroachment with me. I think, the eviction process is being carried out abiding by all rules and regulations,” said the sub-collector.

Earlier on October 6, the tehsil-appointed government amin Sankarshana Paikaray had carried out measurement site and clarified that there is no encroachment by Sarua-based Odisha Infratech Private Limited, OTV’s CSR project.

Speaking in this regard, a local resident said “We have been provided with many benefits including tube wells by OTV. They never opposed us using the road and pond,” a local had said.

Echoing the same voice, another villager had said, “How can we deny that we are not using the road. We along with our cattle use the road to go to the agricultural land. No one from OTV has never opposed us.”

Meanwhile, reacting to the development, OTV authorities said, “Under our CSR initiative, we have set up a Mahila Samiti on our own land. It has its own boundary walls. However, the local Tehsildar along with his team have demolished the wall without any notice.”

A few villagers of Sarua, Jayamangala and Goudagotha in the district had earlier levelled land encroachment allegations against OTV authorities in an attempt to malign the image of the company.

Meanwhile, while the district administration was carrying out eviction without prior notice, Khordha town BJD president Mohammad Arif along with his handful supporters staged a protest at Sarua alleging land encroachment against OTV authorities.