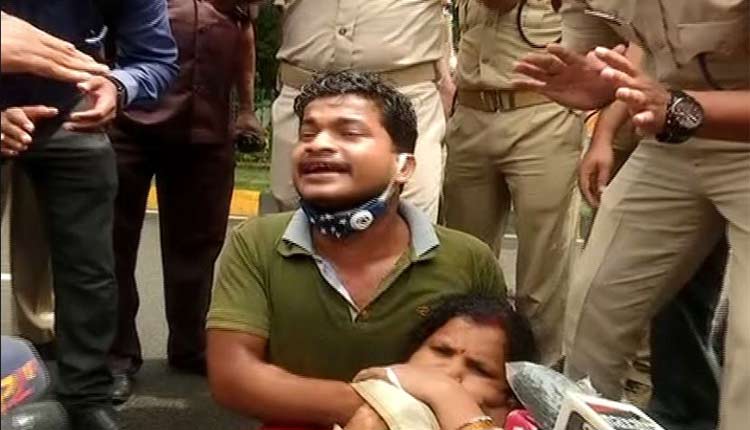 Bhubaneswar: Hours after the high-security zone outside the Odisha Assembly witnessed some bizarre scenes with a youth holding his mother hostage at knifepoint; the police claimed that the youth was mentally unstable.

The youth held his mother hostage right in the middle of a busy road in front of Odisha Assembly and threatened to slit her throat. However, police were able to overpower the youth and safely rescued the woman.

“The youth known to be mentally unstable held his mother hostage outside the security perimeter of the State Assembly. Police officials patiently dealt with the hostage situation & safely rescued the woman,” the Commissionerate Police (CP) tweeted.

#WATCH high drama on #Bhubaneswar street as youth holds woman hostage at knifepoint near PMG in front of #Odisha Assembly & levels allegations against some ministers of the State.

Police rescue the woman & take the youth into custody. pic.twitter.com/qn9Yeo4jI9

While questions are being raised as to how the youth managed to reach the high-security zone with a knife when the monsoon session of the State Assembly is underway, the police claimed that there has been no security breach.

“The concerned police officers will be suitably encouraged for patience & professionalism. The youth is being sent to Psychiatry Department of SCB Medical College. There has been no security breach,” the CP added.

Hostage situation outside #Odisha Assembly: Commissionerate Police clarifies that there was no security breach & the youth who held his mother hostage has known psychiatric ailments. After rescue of the woman, the youth has been sent to Psychiatry Department of SCB pic.twitter.com/shpXoIveHl

Though the exact reason why the youth resorted to such an extreme step is still unclear, a video of the incident revealed that he was taking names of some State ministers.

According to sources, the youth hails from Kauda village under Daspalla Police limits of Nayagarh district. His parents were in jail after being arrested in connection with a murder case in 2014.  Sources informed that the arrest of his parents took a psychological toll and he developed a mental disorder. As per his allegations, the investigation into the murder case was not properly conducted, sources said.

“He is my son. Today, he asked me to accompany him to hospital. Later, he brought me to this place and grabbed me by my throat,” said the woman.