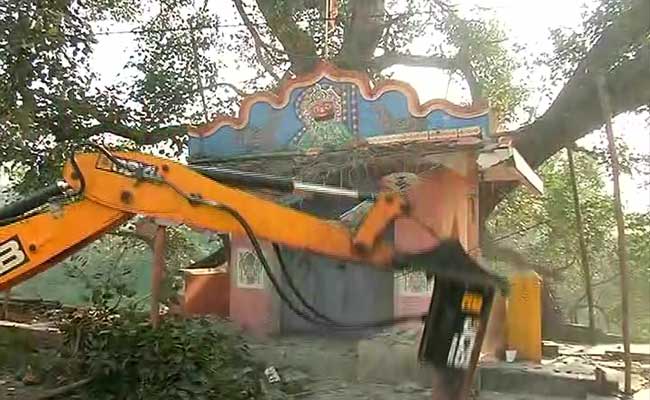 Cuttack: The Cuttack district administration on Wednesday pulled down at least nine temples and six club buildings built illegally on government land for renovation and expansion of the SCB Medical College and Hospital here, officials said.

The authorities have also identified another temple and a club building located on roads leading from Ranihat bridge to the hospital for demolition as part of the eviction drive for the medical college expansion, said Deputy Commissioner of Cuttack Municipal Commissioner (CMC), AC Rout.

Wednesdays eviction was part of the third phase of the ongoing drive and the authorities were very conscious and concerned as it involved demolishing places of worship, an official said, adding the demolition drive went off peacefully without any untoward incident.

Meanwhile, the SCB Medical College and Hospital employees resented the one-month notice given to them to vacate their residential houses. A large number of Class III and Class IV employees with their families protested in front of the office of the hospital superintendent demanding recall of the notice.

The hospital expansion plan also involves demolition of around 500 residential quarters and about 90 shops located inside the campus and adjacent areas.

The employees are demanding alternative arrangements before they vacate their quarters.

The premier teaching hospital is set for a massive expansion with acquisition of another 25 acres of adjacent land.

The eviction drive will be completed by the end of this month, so that the expansion work will begin from the beginning of March, an official said.