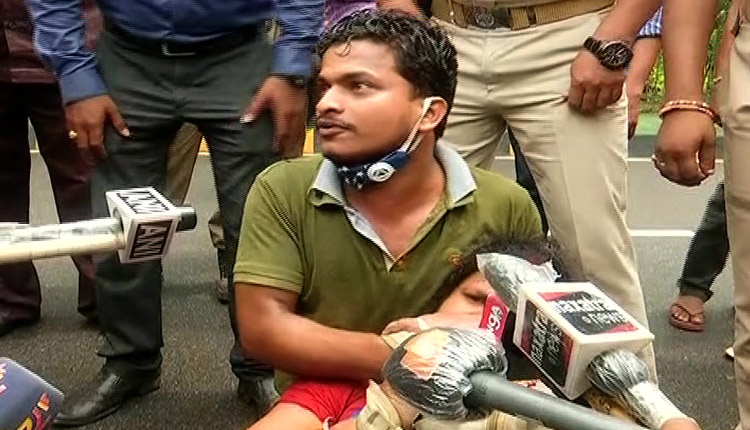 He was overpowered by security personnel and Commissionerate Police officials following an intense scuffle that lasted for several minutes.

The woman has been rescued and the youth taken into custody by the cops.

#WATCH high drama on #Bhubaneswar street as youth holds woman hostage at knifepoint near PMG in front of #Odisha Assembly & levels allegations against some ministers of the State.

Police rescue the woman & take the youth into custody. pic.twitter.com/qn9Yeo4jI9

As per reports, the youth hails from Nayagarh district and the woman he taken hostage happens to be his mother. Though the exact reason why the youth resorted to such an extreme step is still unclear, a video of the incident revealed that he was taking names of some State ministers.

“He is my son. Today, he asked me to accompany him to hospital. Later, he brought me to this place and grabbed me by neck,” said the woman.

Following the incident, the Commissionerate Police clarified that there was no security breach & the youth who held his mother hostage has known psychiatric ailments. After rescue of the woman, the youth has been sent to Psychiatry Department of SCB.

A youth, with known psychiatric ailments, held her mother hostage outside the security perimeter of the State Assembly. Police Officers patiently dealt with the hostage situation & safely rescued the mother. (1/2) @SarangiSudhansu @dcpbbsr @odisha_police

Speaking to mediapersons, Bhubaneswar DCP Umashankar Dash said the incident occurred near eastern gate of the Assembly on Sachivalaya Marg when the youth took the woman into hostage by threatening to kill her with a sharp weapon. But police officials present at the spot showed great professionalism and neutralised the situation to rescue the woman.

Dash mentioned that there was no security breach of the Assembly but the incident happened on the freeway of the PMG which is not under the restricted zone for the Assembly session currently underway.

The incident raised several questions on security arrangements at a time when senior officials claimed to have made elaborate preparations.

Senior Congress MLA Suresh Routray raised questions on the security arrangements made for the legislators and other VIPs during the Assembly session.

“I am shocked to see such hostage situation happen in front of the Assembly that too when the House is underway. How could the police fail to prevent the incident? Had the youth taken some minister, Speaker or even the DGP of the State into hostage who would have been responsible?” questioned Routray.