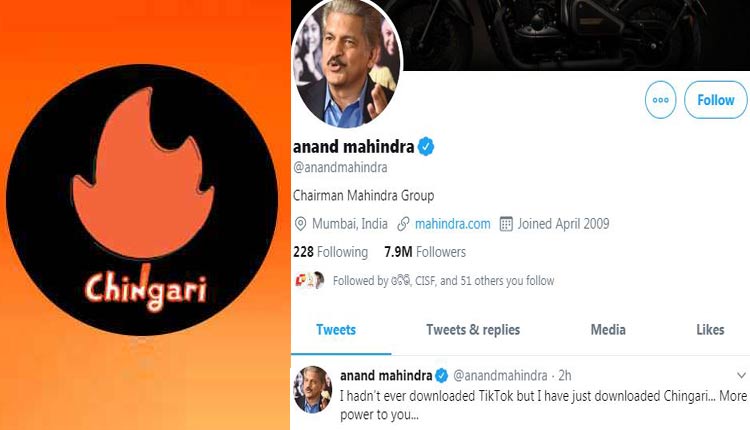 Bhubaneswar: Chingari App, co-developed by Odisha’s Biswatma Nayak is really lighting up the online video sharing application scene after it crossed 2.5 million downloads on Google play store in a span of a couple of weeks.

Such has been the popularity of the app that even the bigwigs of India Inc came out in praise and support the app, which is being touted as a promising competitor of TikTok app.

Taking to Twitter, noted industrialist Anand Mahindra posted, “I hadn’t ever downloaded TikTok but I have just downloaded Chingari… More power to you…”

I hadn’t ever downloaded TikTok but I have just downloaded Chingari… More power to you… https://t.co/9BknBvb8j3

In fact, the app is currently among the top 10 trending apps on Google Play store.

Speaking to OTV, Biswatma Nayak had earlier stated, “I am quite happy that the app is being received well by the users and hope that we will continue to deliver on the user expectations.”

Chingari app allows a user to download and upload videos, chat with friends, interact with new people, share content, and browse through the feed. A user also gets the opportunity to go creative with WhatsApp status, videos, audio clips, GIF stickers, and photos. It also pays its users based on how viral the content creators video becomes. For each video a user uploads on the app, the content creator gets points per view and these points can be redeemed for money.

As stated by the developer, the primary difference between Chingari and TikTok is that the former pays a content creator on the basis of how viral the video becomes.

Biswatma Nayak, who hails from Cuttack district of Odisha, has developed the app along with Siddharth Gautam. The custom-designed audio and video-based free social platform was developed in 2019 and in a short span, it has achieved the milestone of over 2.5 million downloads.

“I hadn’t ever downloaded TikTok but I have just downloaded Chingari. More power to you,” tweets Anand Mahindra after #Chingari App crosses 2.5 million downloads

Biswatma Nayak, who hails from Cuttack district of #Odisha, has developed the app along with Siddharth Gautam pic.twitter.com/TKSqSdmj4s