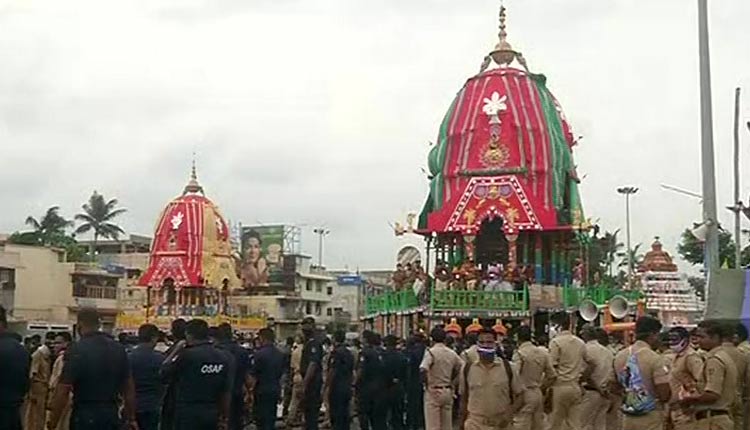 Puri: The majestic chariots Taladhwaja, Darpadalana and Nandighosa of the Holy Trinity were turned southwards, a practice called Dakshina Moda in local parlance and parked at Nakachana Dwara (exit gate) of Gundicha Temple today for the Bahuda Yatra of the Holy Trinity in Puri.

As per tradition, concerned servitors of the three chariots brought ‘Agnya Mala’ the garland of consent from the deities to begin initiation of the chariots after the Sakala Dhupa and other special rituals of Lord Jagannath and his siblings at Adapa Mandap in the Gundicha Temple.

The servitors along with police personnel turned the chariot of Goddess Subhadra towards the south which was followed by the chariots of Lord Balabhadra and Lord Jagannath, as per rituals.

Unlike every year, the rituals were conducted without any devotees on the Bada Danda owing to the restrictions in the wake of Covid pandemic.

On Saturday evening, the Hera Panchami ritual was performed smoothly by the Pati Mahapatra servitors. As per the custom, Goddess Mahalaxmi reaches Gundicha temple by seating on a palanquin carried by the servitors but she feels insulted after finding the main gate locked. She breaks a part of Nandighosha chariot to show her anger at Lord Jagannath for leaving her alone in Srimandir during Rath Yatra.

Later she returns to the Srimandir through the Nakachana gate by taking the Hera Gohiri Sahi route.

The Bahuda Yatra of Lord Balabhadra, Devi Subhadra and Lord Jagannath will be conducted on July 1. The district administration has decided to enforce curfew across the district from 10 PM of June 30 to 10 PM of July 2 in view of the return Car Festival.