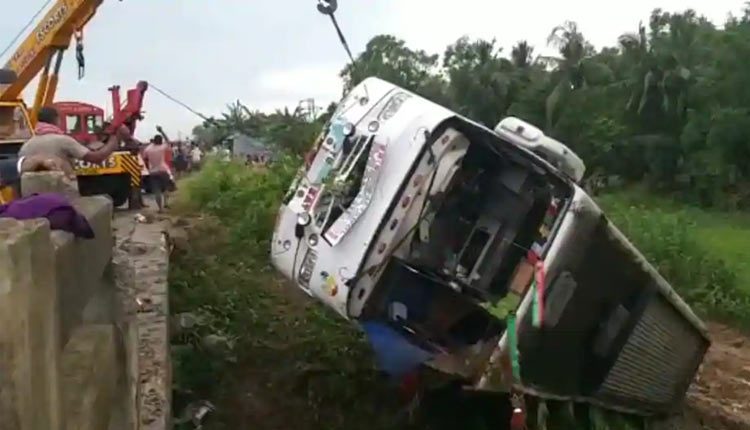 Balasore: As many as seven people were injured when a bus ferrying West Bengal-bound migrants overturned in Balasore on Saturday. The bus was carrying migrant workers who were stuck in Kerala due to the nationwide lockdown,

As per reports, the bus carrying as many as 38 passengers was on its way to Kolkata when it skidded off the National Highway 16 and overturned near Balasore town, causing injuries to seven persons, a police official said.

Police and fire service personnel rushed to the spot and rescued the passengers with the help of locals, while the injured persons were sent to the district headquarters hospital here, he said.

The passengers, who were engaged in various establishments in Kerala were returning homes in different places in West Bengal after remaining stranded in the southern state since March due to the lockdown, the official said.

The condition of the injured persons was stated to be stable. The rest of the passengers were kept in a temporary camp by strictly adhering to social distance guidelines, informed the police official and added that arrangements were being made to send the migrant returnees to their destinations in another bus.

Two similar incidents were reported on May 19. In one accident, at least 10 Odia migrant were injured when the bus ferrying them from Tamil Nadu met with an accident near Tangi area in Cuttack district. The injured passengers were rushed to Cuttack SCB. While the other incident claimed one life and left many injured. Reportedly, the bus ferrying passengers from Navi Mumbai in Maharashtra to West Bengal collided with a gas tanker near Luhamunda under Handapa Police limits on NH-44 in Angul district.

Certain other incidents of bus mishap were reported on May 2, 3 and 5 consecutively. The tragic bus mishap on May 2 claimed two lives. The bus ferrying Odia workers from Surat suffered the mishap near Andharkote in Kalinga Ghat on Kandhamal-Ganjam border, while the accident on May 3 left five persons injured after the bus ferrying migrants from Surat to Ganjam district overturned near Karanja on Nagpur-Amravati National Highway (NH) in Maharashtra. One more bus carrying around 40 Odia migrants met with an accident May 5, in which one person was killed and two others were injured. As reported, the bus was en-route to Banki in Khurda from Hyderabad when the mishap occurred on NH-16 near Kuhudi in the district.

Migrant Among 3 Killed, Many Injured In Separate Road Mishaps In Odisha