Kendrapara: At a time when many will find it hard to memorise Sanskrit shlokas and other mantras, a Muslim girl from Odisha’s Kendrapara district comes as a pleasant surprise.

Though Samjana Khatun comes from a different faith, it has not deterred her to recite many Sanskrit hymns and Vedic invocations, showcasing the real diversity of the country which is united by the strings of communal harmony.

Samjana, who has completed her matriculation (10th standard education), can also sing bhajans of Lord Ganesha and Goddess Saraswati. Though Samjana wants to pursue higher education, the family’s poor financial condition has come as a major hurdle before her dreams.

As per reports, Samjana’s mother Sultana had encouraged her to follow her passion and sing various devotional bhajans even those are outside their faith.

“I have never dissuaded my daughter in whatever she does,” said Samjana’s mother Sultana.
Samjana’s father Sk Karimuddin is a Divyang while her mother works as a daily wage labourer to support the family. The poor family stays in a thatched house and the members go hungry if Sultana fails to get any work.

Under such dire circumstances, Sulatana’s mother failed to foot her daughter’s further studies.

“I want to study, but my family’s condition doesn’t allow me to pursue higher education,” said Samjana. 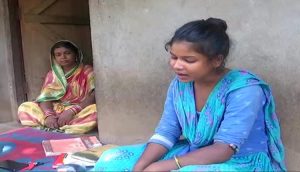 Despite being a meritorious student, Samajana can only get wings if she gets some kind of assistance or support from the Odisha government, say neighbours.

“The girl had called me and expressed her inability to take admissions. But I have assured to help her. But it will be more appropriate if local administration or government extends support,” said Nrusingha Rout, Samjana’s teacher.

Meanwhile, Kendrapara Sub-Collector Jyotishankar Mohapatra has assured to extend all possible help to the girl.

“I have directed the district education officer and welfare extension officer to look into the matter,” said Mohapatra.

Daylight Robbery At Shop In Ganjam, Police On Toes To Nab Miscreants