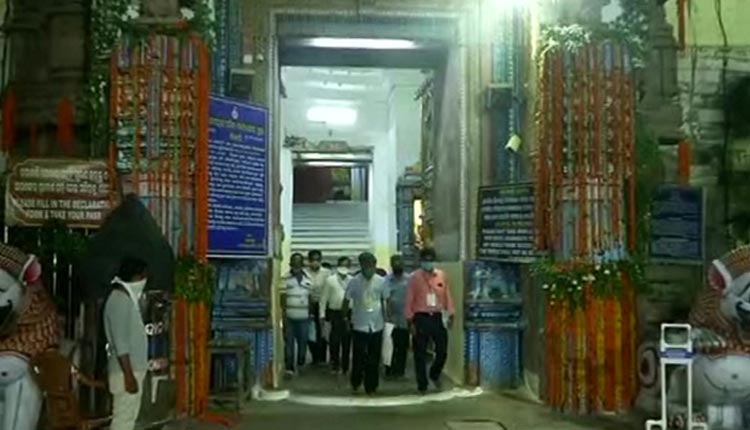 Puri: A team of Archaeological Survey of India (ASI) has begun inspection of the Garbha Gruha (sanctum sanctorum) of Lord Jagannath Temple in Puri from today as the Holy Trinity are away on their annual sojourn at Mausi Maa temple.

NC Pal, chief of the technical core committee of ASI, informed that the repair works of the Nata Mandap, Rosha Sala and Bhoga Mandap passage will be conducted inside the temple premises during the week.

“In a priority basis, we will try to repair and level the passage connecting Rosha Sala and Bhoga Mandap during the period,” said Pal.

According to reports, the team will also carry out chemical treatment of the sanctum sanctorum to protect it from the saline wind and moisture.

Nata Mandap’s upper portion is well ventilated however, facilities will be ensured for proper aeration in the lower part, said Pal.

The team has inspected the cracks in the Bhoga Mandap and after a discussion with the temple administration and the servitors, we will take further steps in accordance with Covid guidelines, he added.

It may be noted that due to the novel coronavirus pandemic, no experts from outside have been included in the ASI inspection team this year, which undertakes this inspection during the Ratha Yatra annually.

Meanwhile, the Banaka Lagi’ niti of the Holy Trinity who are at the Gundicha Temple will be held today after the Madhyana Dhupa. Even if the ritual is held several times a year in Srimandir, this is the only time in Gundicha Temple when the Lords will adorn a new look after a special traditional ‘shringar.’

‘Banaka Lagi’ niti of the Holy Trinity will be held today in #Puri Gundicha Temple. Even if the ritual is held several times a year in Srimandir, this is the only time in Gundicha Temple when the Lords will adorn a new look after a special traditional ‘shringar’ #RathYatra pic.twitter.com/Qgr1l2BilV