Kim Kardashian breaks up with Pete Davidson; reason will leave you amazed

Can you guess the favourite filmmaker of Armaan Malik?

25 years of SRK’s 'Pardes'; Unknown facts about the 1997 blockbuster

KGF Chapter 1, indeed, has become a benchmark movie of the Indian film industry. Meanwhile, anticipation for KGF Chapter 2 among fans is escalating with each passing day. Prashanth Neel's KGF series has created a world of its own by now which can easily be ascertained from multiple records set by KGF 2's official teaser.

While Rocking Star Yash went on to become a pan-India actor, Prashanth Neel is now being counted among the A-listed directors. Moreover, bigger than life characters from the first instalment of KGF like Garuda. Suryavardhan, etc also caught the attention of action movie lovers. Garuda, who made his acting debut through KGF 1, is now one of the celebrated actors in the South film industry.

What entices the audience is the skills of cinematography of the movie and its presentation. KGF's cinematographer Bhuvan Gowda also went on to garner massive popularity.

While all are waiting eagerly for official KGF 2 updates, fans are keeping vigil eyes on the entire crew involved with the creation of the cult movie.

However, recently Executive Producer of Hombale Films and Founder Partner of KRG Connects Karthik Gowda shared misleading information on his social media page which didn't go well with movie lovers, for which he later regretted.

On his Twitter handle, Karthik shared a picture that stated: "Not Rocking Star Yash, it was Manchu Vishnu. Prashanth Neel first narrated KGF to Manchu Vishnu but he didn't like the script and rejected."

He captioned the post: "Heard from close sources in the Telugu film industry that Vishnu Manchi said this. If true I reiterate. This has 0% truth. Prashanth hasn't even met Vishnu once till now." 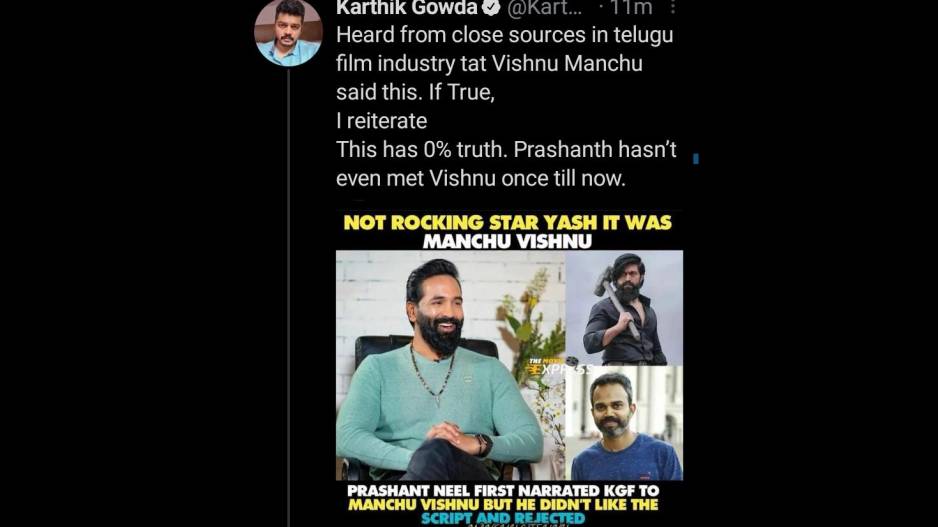 However, later he deleted the Tweet with a note of apology: "Apologies on the previous tweet. Was misled. Have deleted."

Apologies on the previous tweet. Was misled. Have deleted.

Though there is no official confirmation or clarification regarding the 'misled' information, several users lashed out at the cinematographer. Even it remains unclear if actor Vishnu was the first choice for Rocky Bhai character instead of Yash or any such statement was given by the Telugu actor or not. However, many even appreciated Karthik after he apologised for sharing the misleading information.

It is pertinent to mention here that helmer Prashanth had earlier said with the idea of KGF, he had Yash in his mind.

In an interview Prashanth had revealed, "To pan-India market, first of all, you need a big budget and a big star. So, he (Yash) came in automatically into the project. I had seen his movies earlier and I was a fan of his. So, when you are a fan of an actor, it is easier to work with him."

So, considering all these facets it can be stated that the information about Telugu actor Vishnu was misleading and Yash was the first choice for KGF, for which the entire team is currently basking in glory even after 3 years of the release of what is considered a landmark movie of all times.