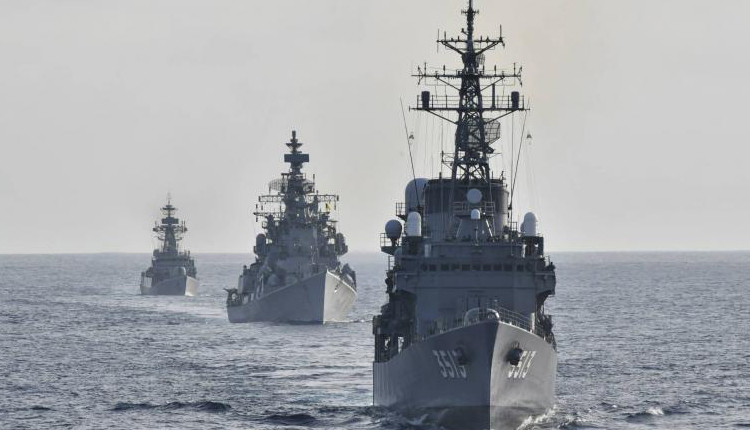 New Delhi: The Indian Navy has conducted exercises with Russia and ‘Quad’ countries – an informal security forum comprising India, the US, Japan and Australia – in a message to China on getting a wider footprint in the Indo-Pacific region.

The Indo-Pacific region is seen from the west coast of India to the US.

The Indian Navy carried out a three-day bilateral maritime exercise with Japan in the north Arabian Sea from September 26, 2020, to September 28, 2020. It was the fourth edition of India-Japan maritime bilateral exercise JIMEX, which is conducted biennially. The last edition of JIMEX was conducted in October 2018 off Visakhapatnam in India.

Naval cooperation between India and Japan has increased in scope and complexity over the years. Advanced level of operations and exercises took place for three days. It is indicative of the continued upswing in Indo-Japanese defence relations and continued efforts by both governments to work closely for a more secure, open and inclusive global commons, in accordance with international regulations.

The helicopter carrier of Japan JS Kaga took part in the recent exercise. The Kaga and its sister ship the Izumo are being converted into aircraft carriers that will carry US-built maritime planes, the F35-B. India, Japan, China and South Korea are the countries now involved in what is seen in strategic circles as the Asian carrier race.

The Australian Navy and Indian Navy carried out passage exercise in the East Indian Ocean Region from September 23 to September 24. The exercise involved the participation of HMAS Hobart from the Australian side and Indian naval ships Sahyadri and Karmuk. In addition, an Indian maritime patrol aircraft and helicopters from both sides carried out the coordinated exercise.

To boost mutual confidence and cooperation, a bilateral maritime exercise between Indian Navy and Russian Navy took place in the Bay of Bengal on between September 4 and September 5.

He also said that the exercise helped to further boost mutual confidence and cooperation between the two Navies and would reinforce the longstanding bond of friendship between the two countries.

The exercise is known as ‘Indra Navy’ and is the 11th edition. It is a biennial bilateral maritime exercise between the Indian Navy and Russian Navy.