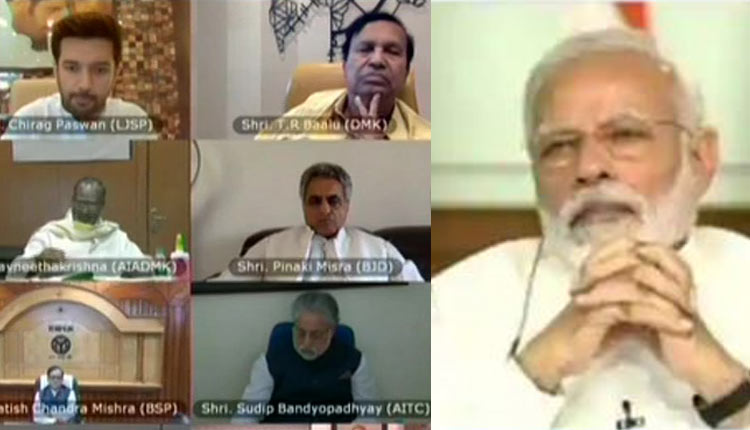 New Delhi: Most of the opposition parties on Friday expressed confidence in Prime Minister Narendra Modi in handling the India-China Line of Actual Control (LAC) issue while the Congress said that valuable time had been lost and asked what is the government doing next.

The all-party meeting started after paying tribute to the 20 Indian soldiers who were killed by Chinese People’s Liberation Army (PLA) on Monday night in an unprecedented attack in Galwan Valley in Ladakh. Union Defence Minister Rajnath Singh briefed the opposition leaders about the situation at the LAC.

According to government sources, most of the opposition parties reposed their faith in the BJP government in handling the border issue with China. Telangana Chief Minister and Telangana Rashtra Samiti chief K Chandrasekhar Rao, Biju Janata Dal and Sikkim Kranti Morcha accused the Congress of trying to create differences.

According to a source Sikkim Kranti Morcha leader Prem Singh Tamang said that “we have full faith in the Prime Minister. The SKM leader added that in the past too, when it came to national security, Modi had taken landmark decisions. The source said that Telangana Chief Minister Rao said that Prime Minister Modi’s clarity on Jammu and Kashmir has angered China. He said Rao also stressed that the Prime Minister’s call for Aatmanirbhar Bharat has rattled China.

The source said that BJD leader Pinaki Mishra said that we stand with the government fully and unconditionally. The source added that CPI leader D. Raja spoke about the need to resist US efforts to drag India into their alliance while CPI-M leader Sitaram Yechuri stressed on the principles of Panchsheel.

All party meeting with PM over India-China border issues: BJD’s Pinaki Misra representing his party said, “We stand with the Government fully and unconditionally”

The source said that most of the northeast parties also firmly stood with the Prime Minister and warned about Chinese designs. Nationalist Congress Party (NCP) chief Sharad Pawar, meanwhile, said that issues of whether soldiers carried arms or not are decided by international agreements and we need to respect such sensitive matters, the source said.

Bahujan Samaj Party (BSP) chief and former Uttar Pradesh Chief Minister Mayawati appreciated the detailed presentation by External Affairs Minister S. Jaishankar. The source said that the BSP supremo stressed on taking appropriate measures on the trade and investment front to counter China. “She said this is not the time for politics and she firmly stands with PM Modi on whatever decisions he takes,” the source claimed.

The JD-U leader, which is an alliance partner of the BJP in Bihar, said that there should be no differences among us and we are together, the source said.

Meanwhile, the Congress alleged that valuable time had been lost and asked what is the government doing next. “We in the Congress Party believe that valuable time was lost between May 5 and June 6, the date on which the Corps Commanders meeting took place. Even after the June 6 meeting, efforts should have been made to talk directly, at the political and diplomatic levels, to the leadership of China,” Congress interim President Sonia Gandhi said in a statement.

She asked the government the question is, “what next? What is the way forward? The entire country would like an assurance that status quo ante would be restored and China will revert back to the original position on LAC.” She said the government failed to use all avenues and the result is the loss of 20 lives as well as dozens injured.

She said that the Congress and the entire opposition unitedly stand by the defence forces and are prepared to make any sacrifice to ensure they are battle-ready.

The RJD, the AAP and the AIMIM were not invited for the meeting.