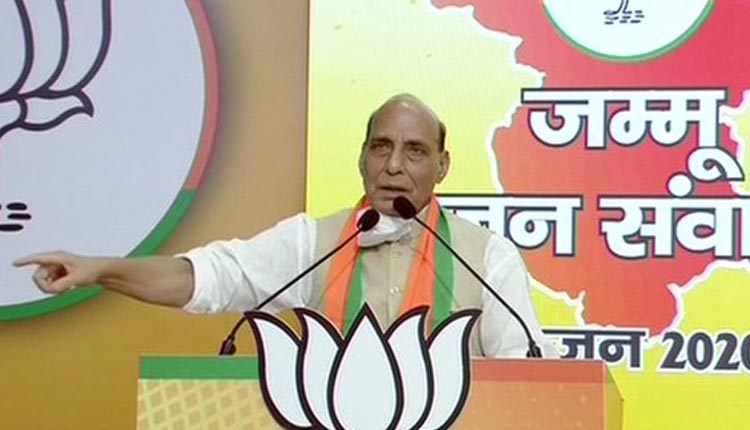 New Delhi: Defence Minister Rajnath Singh said on Sunday that India’s “national pride” will not be compromised as far as border tension with China is concerned.

Addressing the BJP’s virtual rally for Jammuites, Singh also spoke on abrogation of Article 370 and 35A, making a strong pitch for nationalism.

“Both India and China are keen that the issues are sorted through talks at military and diplomatic levels. I want to assure you that India’s national pride won’t be compromised. I want to assure our opposition parties that they won’t be kept in the dark and will be briefed when the time comes,” said Singh.

On the decision to abrogate Article 370, he said while previously the Kashmir valley used to witness ISIS flags being unfurled, the move by the BJP-led Centre has changed the scenario. He also condemned the senseless killing of Ajay Pandita, saying It was a cowardly act.

“Earlier in Kashmir, protests demanding ‘Kashmir azadi’ were held and flags of Pakistan & ISIS were seen. Now only the Indian flag is seen there,” he said.

The Minister also paid tributes to Mohd Makbul Sherwani of Baramulla, who in 1947 hoisted the Indian flag in Kashmir valley.

Going a step ahead, Singh said, “Soon people of Pakistan occupied Kashmir (PoK) will demand that they want to be with India and not under the rule of Pakistan. And the day it happens, a goal set by our Parliament will also be accomplished,” said Singh.

The BJP leader also referred to “strong India” while mentioning induction of Rafale aircraft into the Air Force. “India is moving ahead in defence. The strength of our Air Force will increase after the induction of Rafale fighter jet. We do not want to frighten anyone, but we want to increase our strength to protect ourselves,” he said.

Singh started his ‘Jan Samvad’ with India’s tackling of the Covid-19 pandemic and how even the World Health Organization has praised India’s efforts to combat the deadly virus.