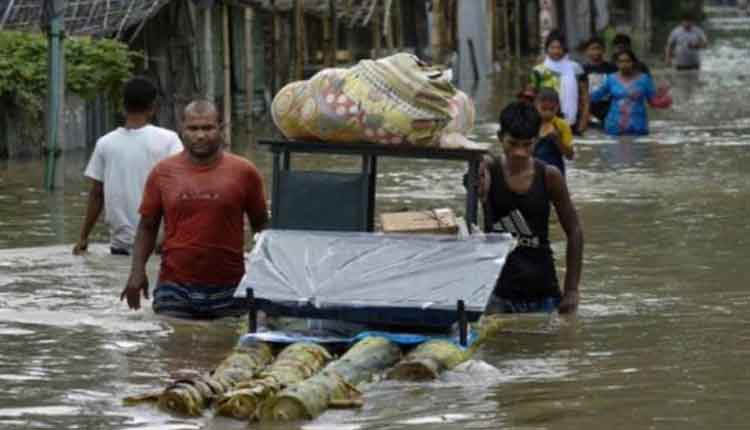 Guwahati: Amid the rising COVID-19 cases, the flood situation in Assam remained grim on Thursday, as five more deaths were reported from four districts, taking the death toll due to the deluge to 71, while around 40 lakh people across 27 of the state’s 33 districts have been affected.

According to officials of forest department and Assam State Disaster Management Authority (ASDMA), at least 76 animals were killed, while 121 animals were rescued as 95 per cent of the world-famous Kaziranga national park, home to more than 2,200 one-horned Indian rhinoceros, was inundated.

An ASDMA official said that over the past more than a month, 71 deaths due to the floods were reported from Sonitpur, Biswanath, Tinsukia, Lakhimpur, Bongaigaon, Kamrup, Golaghat, Sivasagar, Morigaon, Tinsukia, Dhubri, Nagaon, Nalbari, Barpeta, Dhemaji, Udalguri, Goalpara and Dibrugarh districts, while 26 others have been killed in separate landslides since May 22.

The officials said that more than seven rivers, including the mighty Brahmaputra, are flowing above the danger mark in many places in more than 12 districts.

Quoting reports from the districts, they said that the floodwater has submerged 3,218 villages, affecting around 40 lakh people and 131,368 hectares of crop area in 27 districts.

The District Administrations have set up 748 relief camps and distribution centres in 25 districts, where around 50,000 men, women and children have taken shelter.

Though the flood affected 27 districts, 23 – Dhemaji, Udalguri, Darrang, Biswanath, Sonitpur, Baksa, Lakhimpur, Chirang, Barpeta, Bongaigaon, Kokrajhar, Dhubri, South Salmara, Goalpara, Kamrup, Golaghat, Jorhat, Sivasagar, Majuli, Dibrugarh, West Karbi Anglong, Karbi Anglong and Tinsukia – are the worst-hit. Besides erosion of river banks at a large number of places, roads, embankments, bridges, culverts and other infrastructure have been damaged at many locations in 27 districts, the ASDMA officials said, adding that several hundred houses were fully or partially damaged due to the flood.

Around 22 lakh domesticated animals and over 14 lakh poultry birds were affected due to floodwater.

Apart from Kaziranga national park, located on the edge of the Eastern Himalayan biodiversity hotspots of Golaghat and Nagaon districts, the Manas and R.G. Orang national parks, the Pabitora wildlife and the Tinsukia wildlife sanctuaries were also affected.