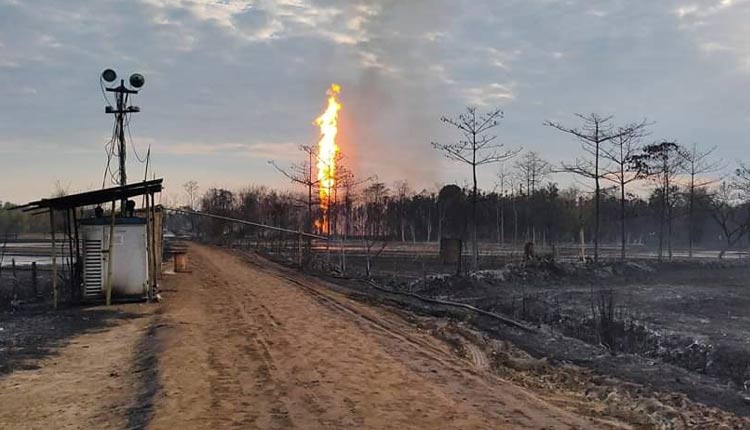 Guwahati: The army has started to build a 150-metre bridge over a water body to facilitate technical works to control gas leakage and oil well fire in the Tinsukia district of Assam, according to officials, here on Wednesday.

In view of the urgency of the situation, Tinsukia District Deputy Commissioner Bhaskar Pegu requested the army to construct a bridge over a water body adjacent to the blowout well, said an OIL official.

“The army is ferrying 17 trucks of material for the bailey bridge from 3 Corps army base at Misamari in the Tezpur district,” the official said.

Gas and oil condensate leakage at the Oil India’s (OIL) oil well at Baghjan, around 550 km east of here, started on May 27. It caught fire on June 9, killing two OIL firefighters and injuring many others.

Experts from Singapore-based Alert along with ONGC, OIL and NDRF engineers and specialists are making efforts to cap gas and oil leakage and douse the fire, which continued for the ninth day on Wednesday.

All India Radio, Dibrugarh, is twice a day broadcasting a bulletin called “Baghjan Barta” since June 13 to inform people about the progress in capping the well.

According to an official release, OIL lost 6,132 tonnes of crude oil production and 7.97 MMSCMD (million metric standard cubic metre per day) of natural gas due to blockades by locals and student organisations in Tinsukia and Dibrugarh districts.

The agitators are demanding higher compensation and have accused OIL of the mishap. The government-owned OIL has provided Rs 30,000 to each of the affected families. Security forces have been deployed at the agitation sites by the district administrations.

Around 7,000 people have been evacuated and sheltered in 14 relief camps as the fire damaged over 35 houses and other properties.

Petroleum and Natural Gas Minister Dharmendra Pradhan, Assam Chief Minister Sarbananda Sonowal and senior Ministers and officials visited the well site on Sunday and said the affected people would be adequately compensated for losses and action would be taken against those responsible for the incident.

An OIL spokesman said a draft plan for controlling fire had been submitted to the Petroleum and Natural Gas Ministry. Equipment is being brought from different parts of the country.

Locals said the fire had left a trail of devastation in the adjoining areas, including a famous lake. Farms with standing crops as well as ponds and wetlands in the adjoining villages have also been affected.

Experts, environmentalists and wildlife activists are worried as the Dibru-Saikhowa National Park, known for its feral horses, is just 2 km away from the well site.