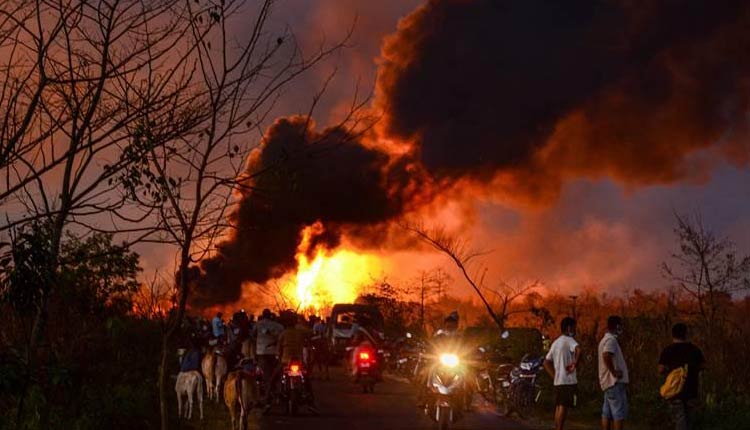 Guwahati: Experts from the US and Canada joined hands with Singapore-based M/s Alert to douse up oil well fire in Assam’s Tinsukia district as the flames continued to erupt on the sixth day on Sunday, officials said.

Union Petroleum and Natural Gas Minister Dharmendra Pradhan, accompanied by Assam Chief Minister Sarbananda Sonowal and other senior ministers and officials, visited the state-owned Oil India Ltd’s (OIL) well, which has been spewing huge gas and oil condensate for the past 19 days. The fire first broke out from the oil well on June 9.

According to OIL officials, a joint recce with M/s Alert, experts from US and Canada was held and under a ‘roadmap’, hectic efforts are going on to control both the gas leakage and massive fire.

An OIL release said the Union minister while visiting the well areas told the people and the officials that the affected residents would be adequately compensated for their losses and action would be taken against those responsible for the incident.

According to an official release, the OIL lost 638 MT of crude oil production from 66 producing wells and 0.46 MMSCMD of natural gas from three gas wells due to blockades by the local people and various student organisations in two districts of Assam.

A senior OIL official said as the firefighters, the NDRF and engineers intensified their efforts to douse the fire on June 9, various student organisations and other associations forced OIL to stop its operations in many drilling locations and nine work-over locations in Tinsukia and Dibrugarh districts.

Security forces have been deployed at the agitation sites by the district administrations. The state-owned OIL has given financial aid of Rs 30,000 to each of the affected families.

“If the protests of the local organisations continued, the loss of crude oil, which is 638 MT from 66 producing wells and 0.46 MMSCMD of natural gas till Friday would further increase and hamper the efforts to control the oil well fire,” an OIL official said.

He said a detailed draft plan for the operation to control and douse the fire has been submitted to the Union Petroleum and Natural Gas Ministry. Equipment is being brought from different parts of the country to meet the challenge.

At least two OIL firefighters were killed on June 10 and four others, including one from ONGC, were injured near the oil well blowout site.

The fire can be seen from as far as five km. Around 7,000 people have been evacuated and sheltered in 14 relief camps as the fire completely and partially burnt more than 35 houses.

The Singapore-based emergency management firm has been trying to plug the leakage of gas and oil condensate since it arrived on June 8. The state government has also sought the Indian Air Force’s help.

An OIL spokesman said the fire has been controlled in a 1.5 km radius area, but it is still raging as the “uncontrollable” natural gas is being fed by the well’s oil.

Local people said the inferno has left a trail of devastation in the adjoining areas, including a famous lake.

Farmlands with standing crops, as well as ponds and wetlands in the adjoining villages have also been badly affected. Experts, environmentalists and wildlife activists are worried as the Dibru-Saikhowa National Park, known for its feral horses, is less than 2 km from the OIL’s well site.