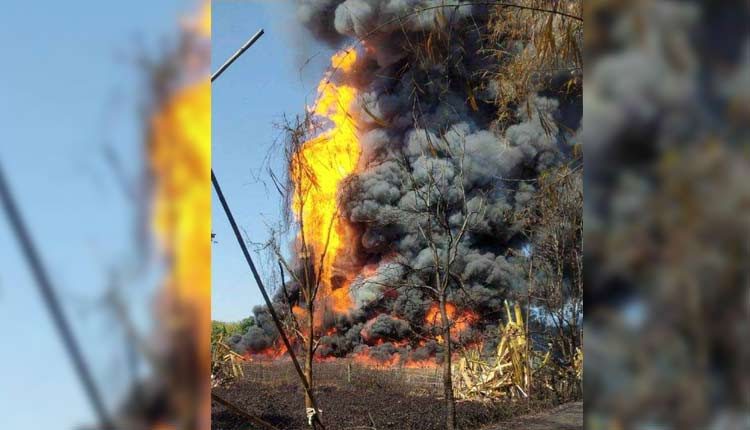 Guwahati: A massive fire broke out at the leaking natural gas producing well of Oil India Ltd (OIL) in Assam’s Tinsukia district on Tuesday even as an expert team from a Singapore-based emergency management firm was trying to plug the leakage, prompting the state government to seek the Indian Air Force’s help to douse the blaze.

Officials in Tinsukia district said that the huge fire, which began on Tuesday afternoon, may spread to adjoining areas if it is not controlled at the earliest.

The National Disaster Response Force (NDRF), which was deployed in the area after the gas leakage started on May 27, further reinforced their strength on Tuesday to control the fire while top officials are also reviewing the situation.

Many fire-fighters and para-military forces are trying hard to control the fire and prevent its spread in the adjoining human habitations, forests, farmland and other areas.

Talking to the media in Guwahati, Sonowal said that all out measures have been taken to save the lives and properties of the people besides controlling the fire.

“Besides NDRF, para-military, state security forces, district administration, ONGC (Oil and Natural Gas Corporation), OIL and other stakeholders are jointly working to deal with the emergent situation. State Chief Secretary and Director General of Police and other top officials are monitoring the situation and time to time, taking necessary steps,” he said.

An OIL press release said that the well caught fire even while the clearing operations were on at the well site.

“There is no casualty reported. A firefighter from ONGC sustained minor injuries. Fire tenders are at the site controlling the spread of fire. While chalking out the plans with the ALERT (Singapore firm) team in the morning, they presented alternate options which also included ‘Capping Stack Guide Rail’ mechanism. ONGC and OIL teams had made considerable progress with the ‘Capping Stack Guide Rail’ Mechanism and it was decided to proceed with the same. However, the current situation would be brought under control by the experts,” the release said.

The oil well at Baghjan in Tinsukia, around 550 km east of Guwahati, has been leaking gas for the past 14 days, causing enormous damage to the region’s wildlife, wetlands and biodiversity.

Farm lands with standing crops, as well as ponds and wetlands in the adjoining villages have also been badly affected and the threat is growing with every passing day.

Many small tea growers in the area have also claimed layers of gas condensates in their tea gardens.

As many as 700 families, comprising 3,500 people, had earlier been shifted to three relief camps after the leakage began.

The state-owned OIL has also announced financial aid of Rs 30,000 to each of the affected families.

An OIL press release said that after the preliminary discussion and de-briefing session, the experts from Singapore’s ‘Alert Disaster Control’, led by Michael Ernest Allcorn, along with the OIL team, reached Baghjan well site on Monday afternoon.

Meanwhile, over 45 environmentalists, academics, wildlife experts, writers, social activists and journalists have expressed concern over the environmental consequences of the blowout near the Dibru-Saikhowa National Park, a biodiversity hotspot.