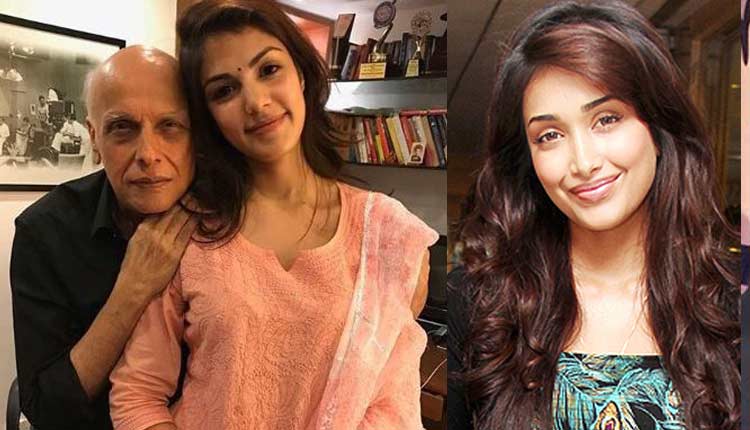 All through the case of Sushant Singh Rajput’s suicide one thing that is crystal clear that Rhea Chakraborty has strong backing from Mahesh Bhatt who asked her to leave the Kedarnath actor as he was mentally unstable. Ever since photographs of Rhea with the famous director went viral some time ago there has been discussion about her relationship with Alia Bhatt’s father.

There was a time when the late actress Jiah Khan who also committed suicide by hanging herself was close to Mahesh Bhatt. Similar to Rhea her photographs with Mahesh Bhatt had gone viral.

Rhea Chakraborty : She was a rumoured girlfriend of SSR and was under 9 hr interrogation by the police. Also rumoured having unusual affairs with Mahesh Bhatt to which her mother defended by claiming that Bhatt Saheb was just like a counsellor to her whenever she felt down. pic.twitter.com/FvBD3iBvwU

The director even claimed that Jiah had come to him asking for work but he was too busy and could not attend her and later on regretted his decision.

"Bhatt recalled a time when late actress Jiah Khan once approached him for work before allegedly taking her life"-What kind of sick soul he must be to malign the dead and spread rumors against sufferers. He Just needs to get treated,he's sick.https://t.co/oTAfPhVxmQ

he was intimidating my sister with his creepy behaviour, she was only sixteen then, he was not her father. My sister walked out of his film. Never met him, I read he said she went to him asking for job, what lies, jiah rejected projects including RGV on lesbianism. #gogetlife pic.twitter.com/Joqjbl7bIh

Responding to this statement Jiah’s sister said, “There is a height to his lies my sister would never go to him as she hated him deeply. She already had six films in the pipeline and has given the proof to CBI. It is this BollywoodMafia who is dragging the case by managing the judicial system in Mumbai.”

There is a height to his lies my sister would never go to him she hated him deeply. she had six films in pipeline we gave proof to CBI it’s these #BollywoodMafia who is putting a stop dragging the case by managing judicial system in Mumbai tell him to get his own health checked pic.twitter.com/PZZdV1crOv

Accusing Mahesh Bhatt of his toxic behaviour, she further added that Jiah disliked the creepy behaviour of Mahesh Bhatt and walked out of the movie which needs a lot of courage to do. What she further said is more interesting and points out exactly what may be happening to Rhea Chakraborty who is currently trying to establish her career in the film industry. Kavita Khan says, “Toxic people try to tie with the contract then isolate you in their poisoned environment if you rebel them den you are “depressed.”

My sister disliked his creepy behaviour and left the film walked out you need courage for that she was never desperate like others are bullied into such Toxic people try to tie with contract then isolate you in their poisoned environment if you rebel them den you are “depressed” pic.twitter.com/ceYIcNCLtK

#Bhatts should recall the time when my courageous sister walked out of his sets and told him she died not want him on the sets that is why he did not join her in dubai but bullied her My sister disliked his creepy behaviour and left the film walked out she did #nishabd after. pic.twitter.com/chgOyYD1uE

Is Rhea In Contract With Vishesh Films?

Rhea Chakraborty was signed by Vishesh Films helmed by the brother duo Mukesh and Mahesh Bhatt for Jalebi. Although Mahesh Bhatt did not direct the film being the producer he was always around the sets during the shooting. In the film industry, it is usual for a production house to have a multi-film contract with a particular actor. Jiah too had a movie contract with Vishesh Films but left it because of the creepy behaviour of Mahesh Bhatt.

Now many are wondering whether Rhea too has any such contract with the production house which is why she has been shielding a lot of information related to the Sushant Singh Rajput case. Rumours are adrift that the Bhatt brothers with the help of Rhea have tried to create a picture that the Dil Bechara actor was unstable mentally and hence committed suicide so that other angles of the actor’s death are not investigated.

Mahesh Bhatt is now going around and dubbing Sushant as a Schizophrenic who was on a similar trajectory as Parveen Babi. Mahesh Bhatt’s brother Mukesh Bhatt also gave an interview and parroted the similar lines to malign the image of Sushant Singh Rajput.
Source : TFI pic.twitter.com/6i5VHFn4Ty

Speculations are adrift that Rhea has learned a lesson from Jiah Khan and do not want to end up like the Ghajini actress and hence has decided to play safe and act the way Mahesh Bhatt is directing her.