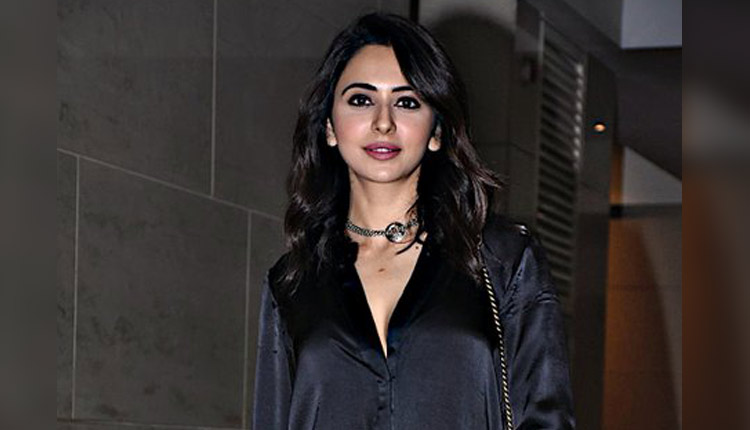 Rakul Preet Singh has come a long way since debuting in the film industry at the age of just 18 years. With no film background as an outsider, it was difficult for her but it is the support of her family that helped her move ahead and become successful. On Father’s Day, the actress in a live session with interviewer Rudrani revealed some of the secrets of her personal life. Her father Col. KJ Singh too joined the interview adding more authenticity and value to the interaction.

The actress said that her father who was an army officer has set the boundaries real high. They are pretty difficult to reach. The De De Pyaar De actress believes there are not enough men with a depth around which is why Rakul Preet Singh is unable to find the right kind of guy for herself. According to the actress, her father is quite an aware man who has in-depth knowledge about everything including current affairs whereas most of the guys around today do not dig deep and are only contented with superficial things.

While revealing how families of army soldiers deal with the uncertainly that is a part of their regular lives, Colonel KJ Singh said that their wives get used to it. He said, “We live in the present not imagining things that can happen later on.” His advice is being prepared for the worst but live life in the present.

Rakul said it’s sad that people in India do not understand what soldiers are facing. People find staying at home to protect them against COVID-19 difficult and here are the soldiers who are coming out in the open just to protect their countrymen.

Rakul’s Father Says Indians Should Be Grateful Towards Indian Army

The Col. said the nation needs to be more aware and grateful towards people who are giving everything for the country. He further added that the US army has never fought a real battle; rather they have fought only to defend the policies of their country. On the other hand, the Indian soldiers have been defending the borders for years but they are not given due respect. The Aiyaary actress gave an example as to how in the US armed forces are looked up and their contributions are celebrated. Rakul laments that a lot of people in India even do not know the basics like the rank system in the military which is quite unfortunate.

In an exclusive interview with Zoom on the occasion of Father's Day, @rakulpreet and her father Col KJ Singh talk about Indian soldiers. Rakul Preet reveals that in the relationship a girl looks up to a man who has qualities that a father has. Col KJ Singh talks about how he felt when he was far away from family in a remote area. He also speaks about how his wife who played an important role. Rakul also speaks on how in a foreign country like the US the army force celebrates and looks up to them. She exclusively speaks about her school incident where she bunked and got caught, and never informed her father about it. She also speaks about her father and what quality she finds best in him. Watch the video to know more. @zoomtv #FathersDay #fathersday2020 #daddy #RakulPreet #Celebs #Bollywood #Movies #FilmIndustry

When the interviewer asked the actress to reveal something about herself which her parents do not know as Father’s Day exclusive, the Yaariyan actress said that there are usually things like bunking school and college. The actress said that she has never been a rebellion and instead has almost followed what she has been asked to do albeit drifting a bit sometimes. But it is the Colonel who surprises by saying that he will still give his dear daughter 10/10 because it is all a part of growing up because if you do not do it then you may end up doing it later.

The actress proudly said that her dad has been a big support and that she always takes decisions consulting him. Rakul also recalls how he eased her mind when she was to fake a kissing scene in her first movie and was pretty uncomfortable doing it.