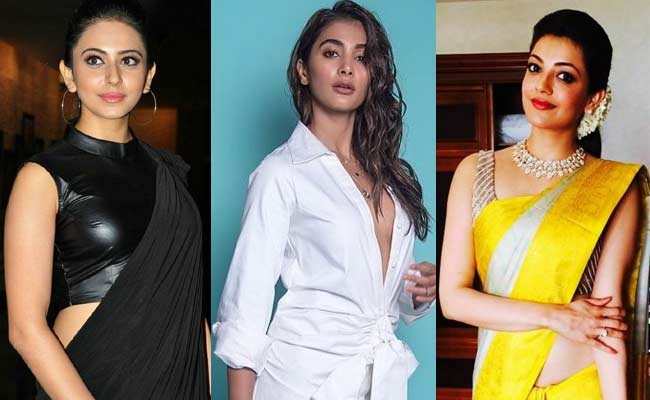 Rakul Preet Singh, Pooja Hegde, Kajal Aggarwal are the leading young South Indian actresses who have also made a good impact in Bollywood. These firebrand actresses have worked with top-class leading men in the B-town.

The actress who has slowly managed to gain a good standing in the Hindi film world already is a big name in the South Indian film industry. Recently she revealed that the one actor in Bollywood whom she admires the most is none other than Ranveer Singh. Rakul says that her all-time crush is the “Gully Boy’ actor. She believes that he is one of the finest talents in India.

[Video] “My all time crush is Ranveer Singh. Not a crush way but I really look up to him. I think he is fantastic & one of the best talents that we have”- Rakul Preet Singh via her Instagram Live ? pic.twitter.com/5mnfqnf2zP

Pooja Hegde who was busy shooting with Prabhas for a romantic movie titled “Jaan” before the lockdown had a good 2019 in Bollywood as her “Housefull 4” movie opposite Akshay Kumar, Bobby Deol, and Riteish Deshmukh was a big hit. Pooja is doing both Hindi and South Indian movies currently. She debuted in the Hindi films through “Mohenjo Dara” with none other than superstar Hrithik Roshan in 2016. It was a big launch as the movie was directed by Ashutosh Gowarikar who is known for big-budget movies like “Jodha Akbar” and “Lagaan.”

Although the movie did not do well at the box-office, this beauty queen was happy that her dream had come true. According to Pooja, she has a crush on the “War” actor and that she has always loved Hrithik. So it was a big thing for Pooja to get to work with him in her first flick itself.

Kajal Aggarwal Has A Big Crush On Rohit Sharma

Kajal Aggarwal who starred opposite Ajay Devgn in “Singham” which was a blockbuster was last seen in Hindi movies in “Special 26” in 2013. However, she is doing well in South Indian movies. While discussing her crush during an interview, the “Kyun! Ho Gaya Na” actress revealed that she has a crush on Indian cricket star Rohit Sharma. Kajal loves the cricketing skills of the Indian vice-captain and never misses his matches.