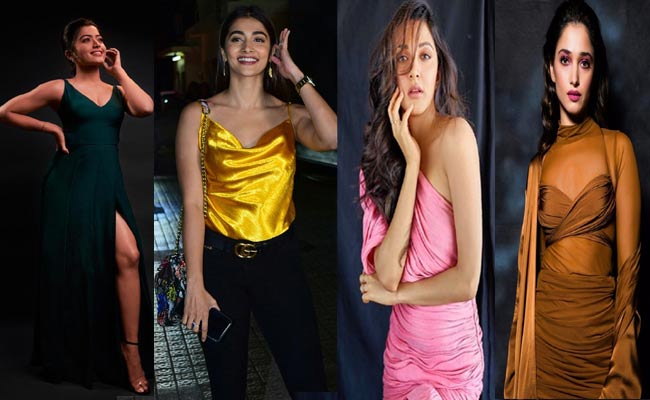 Rashmika Mandana, Pooja Hegde, Kiara Advani, and Tamannaah Bhatia are few of the topmost South Indian actresses known for their acting skills as well as hot looks. While Kiara and Pooja are now also doing well in the Hindi film industry, both Tamannaah and Rashmika have currently a good career going for themselves with big banners approaching them for movies.

These actresses are very serious about their fitness and diet and are always in good shape. That is why whenever they share their hot photographs from shoots or from real life they always attract a lot of responses and following.

Bigg Boss 14: Rakhi Sawant Shocks Housemates As She Tattoos ‘I Love Abhinav’ All Over Her…

From forgetting her Twitter password to gracing an ivory-colored white saree, Rashmika Mandana’s every action always attracts a lot of attention. Recently she attracted a lot of good vibes and comments when she draped a gorgeous ivory-colored saree designed by Shilpa Reddy. The South Indian diva looked like a princess and with minimal makeup, twisted hairdo; bright lips and statement earrings rocked the elegance.

Also Read: Nayanthara, Samantha & Rashmika In 2020: What To Expect?

Just as Rashmika is versatile on the screen, she is equally versatile and experimental when it comes to her looks. One of the video edits of Rashmika’s songs that surfaced recently on the internet shows her rocking the foot-tapping numbers in sexy dresses. The actress who has a big following in Kollywood is all set to debut in Tamil.

Pooja Hegde made her debut against Hrithik Roshan in Ashutosh Gowarikar’s “Mohenjo Daro” but the movie flopped at the box-office. However, her recently released movie “Housefull 4” has worked wonders and it seems she has finally arrived in Bollywood. Moreover, she has also grabbed a big project with none other than Bhaijjan Salman Khan and is also shooting in Georgia with Prabhas for his upcoming flick. The actress soared up the heat recently when her flesh-flashing snap surfaced online.

#PoojaHegde turned up the heat when she dropped a flesh-flashing snap pic.twitter.com/Azj00XjalZ

Kiara Advani had a big hit in the form of “Kabir Singh” last year and recently released “Good Newwz” and “Guilty” sort of helped her gain a firm foothold in the Hindi film industry. She is currently busy shooting for “Bhool Bhulaiyaa 2” with Kartik Aaryan and also completed the “Laxmmi Bomb” with Akshay Kumar. The actress created quite a ripple when her nude photoshoot for Dabbo Ratnani’s calendar surfaced on social media. In the picture, the only thing that is covering Kiara is a big leaf that Dabbo said was inspired by his old photoshoot with Tabu.

Tamannaah Bhatia is yet another South Indian actress who has millions of fans. Recently the actress completed 15 years in the film industry and shared some stunning and glamorous pictures of her depicting her evolution throughout the journey. She was also in the limelight a couple of days ago for demanding an eight-digit package for starring in the film of Balakrishna.

Alia Bhatt in the list of Ranbir Kapoor Ex-Girlfriends

Bigg Boss 14: Rakhi Sawant Shocks Housemates As She Tattoos ‘I Love Abhinav’ All Over…

#Watch Godzilla Vs Kong: Most Deadly Monsters Clash In The Battle Of The Year