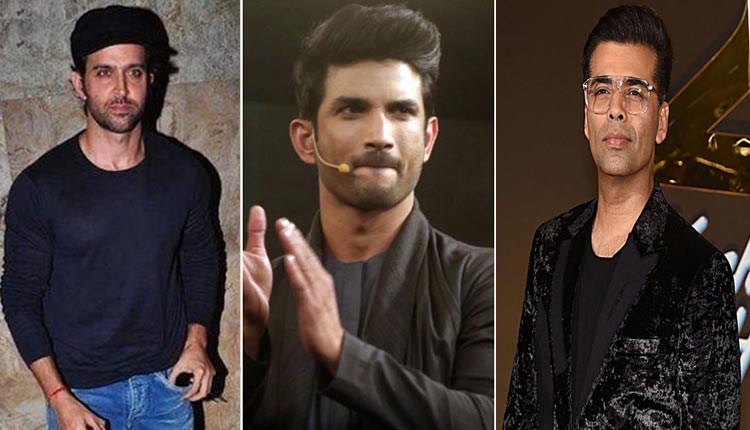 Sushant Singh Rajput is no more. But his suicide has shocked the film industry opening up many actors and directors who until now were silently suffering the bullying treatment meted out to them by the insiders in Bollywood. As a young boy, it was Hrithik Roshan who inspired Sushant to become an actor. The Krrish actor is known for his excellent dancing skills and Sushant was passionate about both dancing and acting. Since he is one of the insiders, Hrithik must have been having a clear understanding of what happens to those who do not have a Godfather in the film industry.

Hrithik Roshan and Karan Johar belong to filmy families and have known each other since childhood enjoying birthdays and film functions together. Karan directed Hrithik in Kabhi Khushi Kabhi Gham and was the producer of Hrithik’s Agneepath. Both have always been on good terms. Incidentally, the ex-wife of Hrithik Sussanne Khan belongs to one of the close circles of Karan.

When the news of Sushant Singh Rajput’s suicide surfaced, Karan Johar came out with a condolence tweet and after some time shared a long post on his official Instagram account. In this post, the famous director has revealed how he felt at times reaching out to Sushant but he did not do so and is regretting it. The Koffee With Karan host is revealing his guilt in the post for failing to connect with Sushant in times of his distress.

I blame myself for not being in touch with you for the past year….. I have felt at times like you may have needed people to share your life with…but somehow I never followed up on that feeling…will never make that mistake again…we live in very energetic and noisy but still very isolated times …some of us succumb to these silences and go within…we need to not just make relationships but also constantly nurture them….Sushants unfortunate demise has been a huge wake up call to me …to my level of compassion and to my ability to foster and protect my equations…..I hope this resonates with all of you as well….will miss your infectious smile and your bear hug ….💔💔💔

While Karan has been dragged into a war against nepotism by Twitter users and is claimed to be one of the influential persons in Bollywood who bullied and boycotted Sushant Singh Rajput leading him to commit suicide, fans have been intrigued by the comment of Hrithik Roshan on Karan’s post.

Deeply saddened and shocked to hear about Sushant. My heart goes out to his family and loved ones. He had so much life in him . Extremely disheartening news.

Fallout Between Karan And Hrithik?

Like others, the death of Sushant has shocked Hrithik and by making such a sarcastic comment he has indirectly hinted that Karan has failed to act responsibly.

His one-word reaction speaks volumes of what exactly he feels towards Karan Johar in context with Sushant Singh’s death and is an indication that there is already a crack in the friendship of Hrithik and Karan.