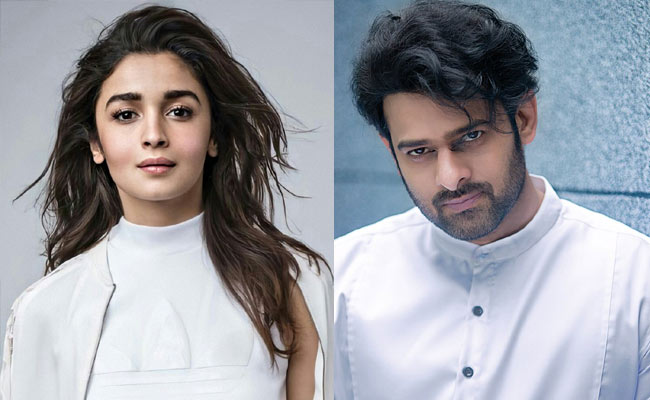 Alia Bhatt currently has two mega-projects Brahmastra and Takht in her kitty. The Gully Boy actress will also be seen next in Sadak 2, a sequel to her step-sister Pooja Bhatt and Sanjay Dutt movie directed by her father Mahesh Bhatt. Incidentally, the Naam director is making a comeback after long years and the movie will have original lead stars as well as Alia and Aditya Roy Kapur. Plus, the Dear Zindagi actress has been signed by the Baahubali director Rajamouli for RRR which will also star Hindi superstar Ajay Devgn.

She was also signed by Sanjay Leela Bhansali for Gangubai Kathiawadi but post lockdown whether the movie will go ahead as planned is doubtful. Even then Alia is very busy and more importantly is currently one of the most successful actresses of B-town.

Will Alia Say Yes To Prabhas 21?

Baahubali was a massive hit and gave Prabhas and other lead star cast international fame. But this larger than life movie also increased the expectations from the stars which are not possible to fulfil all the time. The same thing happened when Saaho was released in multiple languages. It also starred Shraddha Kapoor. Fans had big expectations but the flick tanked at the box-office.

The superstar’s next movie is with Pooja Hegde and most of its shooting has been complete.
Prabhas21 will be his next movie with director Nag Ashwin and reports say that the director is keen on roping Alia Bhatt for the female lead. According to rumours, earlier even Deepika Padukone and Katrina Kaif were approached for the same. But these two leading ladies of Bollywood did not show any interest in the project. Alia Bhatt too does not seem quite willing.

The first reason is that she is very busy with all her current mega-projects and due to the COVID-19 pandemic it is difficult to say how long will it take for the completion of these movies.

Secondly, Alia is already a famous star in Bollywood, and doing a movie with Prabhas may not take her career further from where it is today. Rather if the film becomes a hit in Hindi, it will prove to be a big booster for Prabhas who now needs to establish that he can give a superhit on his own.