Alia Bhatt and Ranbir Kapoor started dating around the time when they began shooting for Brahmastra. According to a few media sources, the couple intended to tie the knot at the end of this year. However, the lockdown has changed many things. Movie projects of both Alia and Ranbir suffered and got delayed. Similarly, during […]

HBD Suhana Khan: From talking about her skin tone to some lesser known facts

Alia Bhatt and Ranbir Kapoor started dating around the time when they began shooting for Brahmastra. According to a few media sources, the couple intended to tie the knot at the end of this year. However, the lockdown has changed many things. Movie projects of both Alia and Ranbir suffered and got delayed.

Similarly, during this period Ranbir lost his dad Rishi Kapoor to cancer. It was a tough time for the Kapoor's and Alia was there all the time not only for Ranbir but also for Neetu Singh and Riddhima. Along with the Kapoor's and the close friends of the family, Alia Bhatt attended the funeral. The actress has fond memories of Rishi Kapoor who was a part of her debut movie Student of the Year. Later on, Alia also worked with him in Kapoor & Sons.

While she was crying for the loss of Rishi Kapoor, Alia also made sure to stand by Ranbir's mother Neetu Singh Kapoor. Neetuji was inconsolable crying constantly. Her daughter Riddhima Kapoor Sahani could not reach the funeral on time due to lockdown. And it is at that moment, Alia made sure that she is not alone. All through the funeral Alia Bhatt stayed close to Neetuji and kept on consoling her. Importantly she was the one who shared the entire funeral process with Riddhima through mobile live so that the daughter could see the last rites of her father.

Even after the funeral, Alia made sure that Ranbir is not alone and accompanied him to his home.

Later on, the actress penned an emotional note on Rishi Kapoor.

It  overwhelmed Neetu who replied, "Love you too." 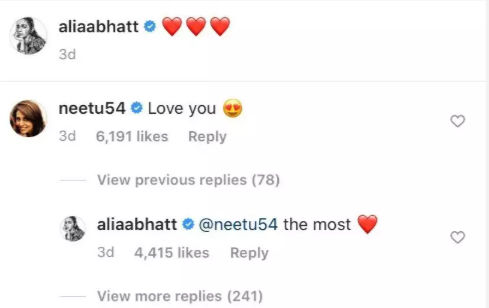 Earlier this year, Ranbir's cousin Armaan Jain tied the knot with Anissa. Alia Bhatt promptly attended all the functions. Alia looked pretty in green and pink lehenga choli at the reception. Incidentally, as if they were a family Neetu Kapoor asked Alia to stand with her and Ranbir when the media started clicking.

In recent times 'Aloo' has been a regular part of all the functions celebrated by Kapoor's. She was one of the main persons who planned Neetuji's birthday on July 8 this year. What's more, she even coaxed Karan Johar to join them. She even penned an emotional note for her would-be mother-in-law. Alia Bhatt wrote, "You have and always will inspire me every single day. Love you too much." 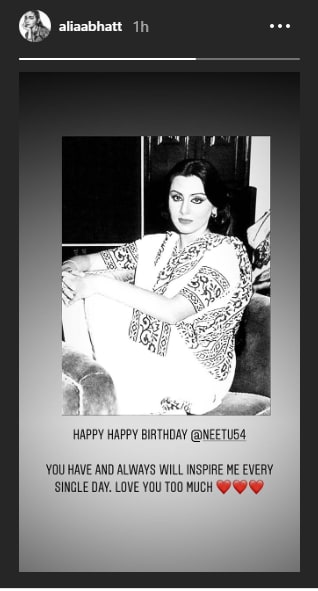 Alia Bhatt also shares a good rapport with Ranbir's sister Riddhima Kapoor Sahani. And it is quite evident whenever she makes encouraging comments on Gully Boy actress's posts.

To this post of Alia, Riddhima commented, "Too Too cute." 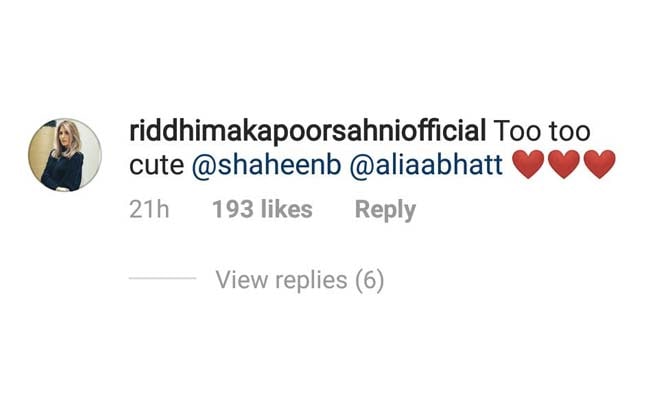 So Alia Bhatt is now very close to both Neetu Singh Kapoor as well as Ranbir's sister Riddhima Kapoor Sahani. So Alia and Ranbir can marry anytime they wish with a blessing from the entire Kapoor family. However, most probably they will marry only after the release of Brahmastra as they planned earlier.