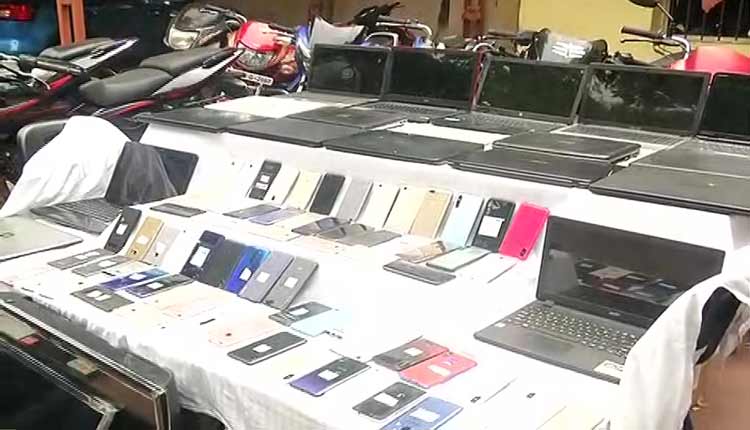 Bhubaneswar: Under fire over spurt in petty crimes during COVID-19 lockdown, Commissionerate Police on Monday nabbed eight members of two criminal gangs which were active in Bhubaneswar. Over 70 stolen mobile phones, 23 laptops, nine motorcycles and two LED TVs have been recovered from the robbers.

Addressing a presser, Bhubaneswar DCP Umashankar Dash today informed that four main culprits and four buyers of stolen items have been arrested in this connection.

These two criminal gangs were actively involved in loot, robberies on highways and at several localities in Bhubaneswar. The gangs were mostly active in areas under Kharavel Nagar, Sahid Nagar, Nayapalli and Khandagiri Police limits.

As per Dash, a special joint-team comprising officers of various police stations and special squad was formed after several incidents of robberies and thefts of motorcycles, mobile phones and laptops were reported in different parts of Bhubaneswar.

Sources said one group of criminals had a well-planned escape strategy and used to apply oil on their body so that they could easily give a slip.

“We have arrested four members of two criminal groups following a special drive. One group was targeting several hostels under Khandagiri and Tamando area and used to loot laptops and mobile phones. The second group used to snatch mobile phones and motorcycles by attacking people during early-morning hours,” said Dash.

Dash further urged people to be cautious while purchasing second hand mobile phones and motorcycles as it might land them in trouble.

The senior official of Commissionerate Police informed that further investigation is on and soon other members of the gang who are absconding will be nabbed.

In another incident, two criminals, who were part of a major vehicle theft gang, were arrested by Soro Police in Balasore district. As many as 25 stolen bikes have been recovered from their possession.

The gang was busted after cops managed to nab a youth, who was trying to escape during a COVID-19 mask-checking drive near Kasipola area. Later, during verification of documents, it was found that the bike which he was driving was a stolen one.

WHO Chief: There Might Never Be A ‘Silver Bullet’ For Covid-19