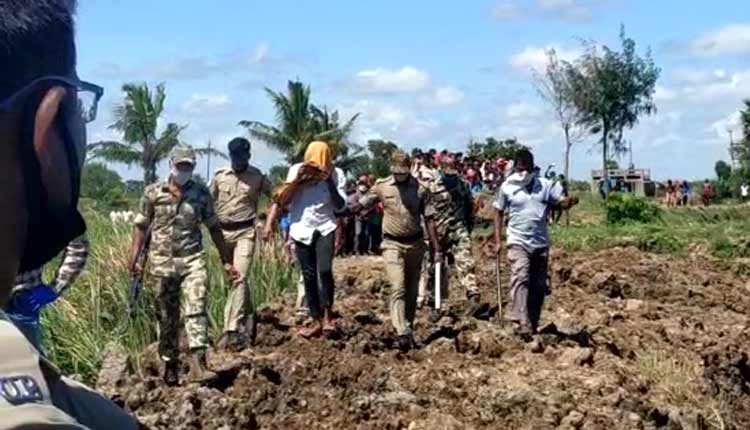 Puri: Police on Saturday exhumed the decomposed body of an 18-year-old girl who was allegedly murdered by her boyfriend in Brahmagiri area of Puri district.

The body of the deceased was exhumed from near the bank of a pond at Srikarpur village in the presence of a magistrate and the accused, identified as Sujit Sahu, has been arrested, police said.

According to sources, the girl was missing since July 18 and her family members had alleged that she eloped with the youth. Last night, some locals spotted the youth roaming in the village and informed the police.

Girl allegedly killed and buried by her lover in Srikarpur village in Puri district; both the youth & the girl were missing since July 18; accused arrested, body exhumed #Odisha

During the interrogation, the accused reportedly confessed to have murdered the girl and buried her body near the pond.

Though the police are yet to ascertain the exact motive behind the murder, the incident has triggered tension in the area. Locals, citing the circumstantial evidence, alleged that more people are involved in the murder.

Puri Sadar SDPO, Kishore Chandra Mund, said, “We had registered a murder case and traced the accused. During interrogation, he confessed to the crime. The body of the girl was exhumed in the presence of a magistrate and it has been sent for post-mortem.”

“Further investigation is underway. The cause of death will be ascertained after the post-mortem report is received,” he added.

Apart from the Puri incident, the State also witnessed a series of crimes yesterday.

A man was beaten to death at Dhurusia village under Khuntuni police limits in Cuttack late on Friday night over a land dispute. According to sources, two families of the village were in a dispute over a government land. A fresh altercation over the land broke out between the two families last night and it took an ugly turn when the two families attacked each other in which a youth died on the spot, sources added.

Elsewhere in Kendrapara, a series of theft was reported form Gotribili and Kinilo villages under Patkura police limits where miscreants allegedly decamped with cash worth lakhs, gold and silver jewellery from five houses.

In Puri, Kakatpur Police busted a gambling den and arrested four gamblers on Friday night. Acting on a tip off, police raided the hideout of the gamblers at Bhandarisahi village.  During the raid, police reportedly had a tussle with a group of people in which an Assistant Sub Inspector (ASI) and a home guard sustained injuries, sources said.

BPCL Strategic Disinvestment To Sail Through Without Further Extensions