The incident occurred when the jeweller, Ranjan Kumar Sahu was opening his shop in the morning today. 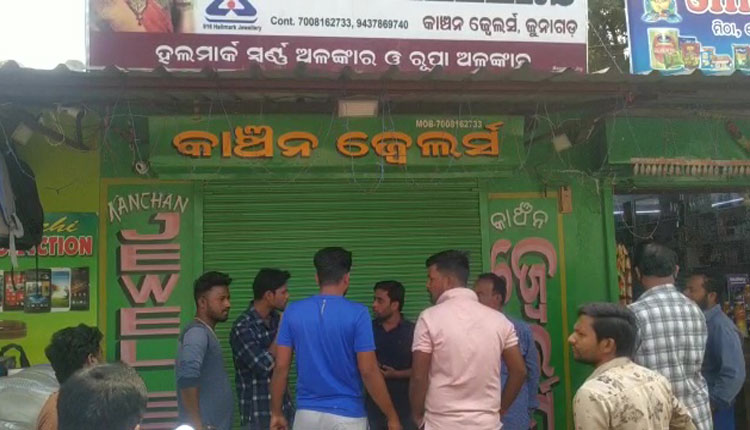 Bhubaneswar: Unidentified miscreants decamped with gold and silver ornaments worth Rs 15 lakh from a jeweller at Kalampur area in Kalahandi district on Wednesday.

The incident occurred when the jeweller, Ranjan Kumar Sahu was opening his shop in the morning today.

“I had kept all the gold and silver ornaments in a bag and was busy in opening the shop when the miscreants fled with the bag. They might have inserted some glue in the lock for which I could not open the lock of the shutter,” said Sahu.

According to Sahu, two miscreants were involved in the loot of the gold ornaments.

“As I was trying to unlock the shutter, a man wearing a face-cover came and snatched away the bag. Both the miscreants soon fled on a motorcycle,” Sahu added.

Uttam Sahu, inspector-in-charge of Junagarh police station said, “A case has been registered and steps are being taken to nab the miscreants.”

Senior police officials informed that footage of various CCTV cameras installed near the jewellery shop are also being examined for clues regarding the miscreants.

On March 1, unidentified miscreants had shot dead Rohit Verma, son of a leading jeweller in Sundergarh district during a loot incident. Another person, who tried to save Verma, was also critically wounded after he came under fire when the miscreants took away a bag containing gold ornaments which the deceased was carrying.