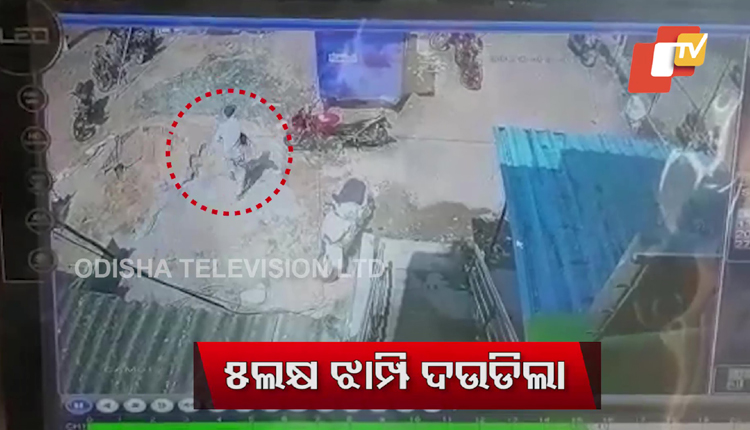 Bhubaneswar: In a broad daylight heist, some unknown miscreants looted Rs 5 lakh cash from a woman near Trinath Bazaar Chhak in Phulnakhara area of Cuttack district.

The entire incident has been recorded in a CCTV camera installed near the crime spot.

As per reports, the woman withdrew the money from the Indian Overseas Bank branch in Phulnakhara at around 12 pm and came back walking to her shop, which is situated at some metres away from the bank.

While she was busy talking to someone in her shop, the two miscreants came in a motorbike and snatched the money bag before fleeing the spot.

“I withdrew the money and came to inspect the construction work in my shop. I was busy speaking to the workers in the shop when two youths came and snatched the money bag from my hand,” said the victim.

The victim chased the looters, but in vain.

“I have no idea since when the two were following me,” added the woman.

Police rushed to the spot after getting information and started investigation by examining the footages captured in the CCTV camera installed at the spot,

Earlier on Monday, unidentified miscreants allegedly looted Rs 2.78 lakh at gunpoint from the Indian Overseas Bank branch at Infocity area in Bhubaneswar. The miscreants reportedly barged into the bank, when only two staff were there and asked them to handover the cash.