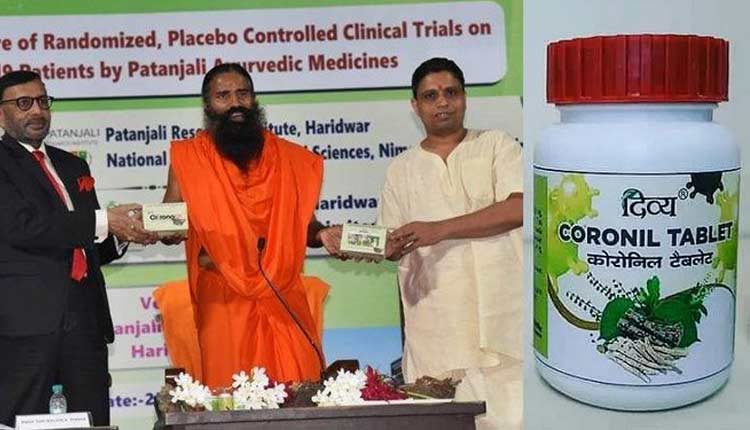 New Delhi/Haridwar: The Union AYUSH Ministry Wednesday said Patanjali can sell Coronil but only as an immunity booster, days after yoga guru Ramdev’s company launched it as a medicine for COVID-19 and is now calling it a product to manage the disease.

Patanjali Ayurved Ltd said there is no disagreement now between it and the Union ministry, which had last week asked it not to sell the ayurvedic drug till the issue is examined.

At his press conference in Haridwar, Ramdev lashed out over the flak he received after the launch of the drug, saying some people are hurt by the rise of Indian culture.

“I want to tell people who want to try these medicines that there is no restriction on their sale now and they will be available in a kit everywhere in the country from today,” Ramdev said, referring to Coronil and the two other products Patanjali is promoting together.

The company claimed that the AYUSH Ministry has categorically agreed that Patanjali had appropriately worked on COVID-19 management.

“Now there is no difference of opinion between AYUSH Ministry and Patanjali, it added in a statement.

The ministry confirmed that Patanjali can sell the product but not as a cure for the disease. AYUSH Ministry has only given permission to sell this particular formulation as an immunity booster and not as a medicinal cure for COVID-19, it said.

Ramdev claimed that the ministry had asked him to use the term Covid management in place of Covid treatment and he is following the instruction.

Even while backtracking on describing Coronil as a treatment for COVID-19, the company stuck to its claim that its trial on mild to moderately ill patients was successful.

The company’s statement said the trial, conducted after the necessary approvals, showed 100 per cent recovery of patients within seven days.

Some people feel research is a monopoly of those who wear a suit and tie. They think a saffron-wearing sanyasi has no right to do any research. What sort of untouchability and intolerance is this?” he said.

As per the ministry, Patanjali is allowed to manufacture and distribute its Divya Coronil tablet, Divya Swasarivati and Divya Anu Talia across India, as per the manufacturing licences granted by State Licensing Authority, Ayurvedic and Unani Services, Govt of Uttarakhand, the company said.

The Uttarakhand department was among the agencies which had questioned Patanjali’s claim to have developed a drug to cure COVID-19.

The department had said Patanjali had only been given a licence to manufacture an immunity booster.

Ramdev said the rise of Indian culture hurts a section of people, particularly the allopathic drug manufacturing multinational corporations which feel threatened every time an ayurvedic medicine launched by Patanjali comes into the market.

He claimed there are at least two allopathic drugs in the market, selling for Rs 500 and Rs 5,000, in the name of coronavirus cures, but nobody is talking about them.

“I and Acharya Balkrishna are from humble families,’ he said, referring to the head of the company.

We have been working for the past 35 years to enhance the prestige of yoga and ayurveda. Building a disease-free India is our mission and it will continue,” he said.

The company got the approval for Coronil and Swasarivati on the basis of their traditional reported usages and has now connected them with modern research-based clinical findings, it said.