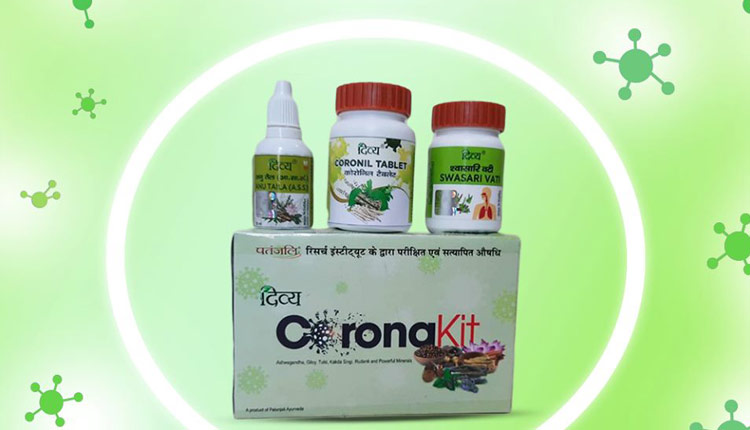 Haridwar: Yoga Guru Ramdev on Tuesday launched Coronil tablet, claims to the possible cure for COVID19. Coming up with a clinically tested, evidence-based medicine was a challenge to Patanjali, says Ramdev. He also talked about various other immunity boosters at an event here during the launch.

Patanjali claims those administered the medicine were fully cured and none died. Ramdev even claimed that 69 per cent of them recovered within 3 days.

“We appointed a team of scientists after COVID-19 outbreak,” said Balkrishna, Ramdev’s close aide and MD of Patanjali Ayurved. He added that Patanjali conducted a clinical case study on hundreds of positive patients.

Patanjali has claimed that the clinical trials which were controlled in nature, was jointly conducted by Patanjali Research Institute which is based out of Haridwar and the National Institute of Medical Sciences, Jaipur.

Talking about the clinical trials, Ramdev said, “Under this, 280 patients were included and 100 per cent of those recovered.” He added they were able to control Coronavirus and its complications.

He said that in the next few days, data of the trail will be released as evidence to bolster claims. There are now over 9 million people affected by the pandemic since it broke out in China’s Wuhan city in December 2019.

He said Ayurvedic elements are being used in the tablet. “There are more than 100 compounds used in the Coronil,” he added. An entire kit is being made for that which consists of other Ayurvedic medicine as well which helps in immunity. The entire kit comes at Rs 600. However, he claimed that it will be given for free to those living below the poverty line.

As for doses, Patanjali prescribes: “2-2 tablets should be consumed with hot water half an hour after meals. The above-mentioned drug intake and quantity is suitable for people between 15 to 80 years of age. Half the amount of the above-mentioned medicines can be used for children between the age of 6 to 14 years.” These are the written instructions on the pack.

India has been battling the pandemic with close to 2 lakh cases in India on Tuesday and around 14,000 deaths so far.