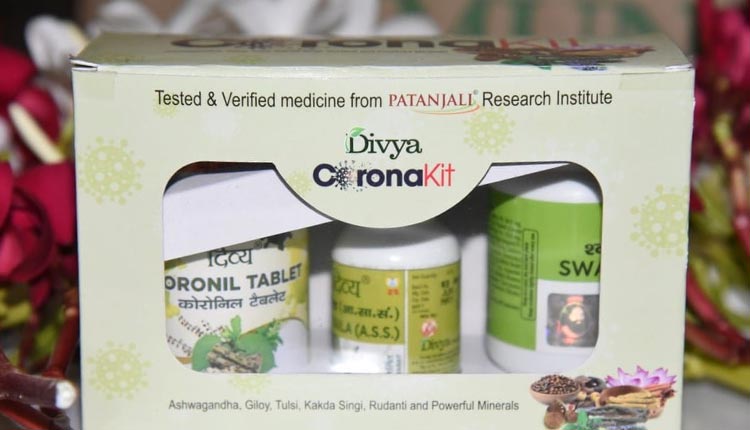 New Delhi: The AYUSH ministry on Tuesday asked yoga guru Ramdev’s Patanjali Ayurved to provide “at the earliest” details of composition and research undertaken prior to the launch of the medicines it claimed are for the treatment of COVID-19, and advised the firm to stop advertising them until the “issue” is examined.

It has also claimed that the two Ayurveda-based medicines have shown 100 per cent favourable results during clinical trials on COVID-19 infected patients except those on a life support system. However, the AYUSH ministry said that the facts of the claim and details of the stated scientific study are not known to it.

Earlier, the ministry had written to state licensing authorities or drug controllers advising them to take action against any misleading information, false claims and misbranding. The directive said that false claims and publicising approval of research study or product manufacturing about COVID-19 control, writing COVID-19 related claims and name of the ministry of AYUSH on the labels and containers tantamount to contravention of legal provisions.

Patanjali Ayurved Ltd has been asked to provide at the earliest details of the name and composition of the medicines being claimed for coronavirus infection treatment, information on sites or hospitals where the research study was conducted and the protocols followed, the AYUSH ministry said.

It has also been asked to provide information on sample size, details of the Institutional Ethics Committee clearance, CTRI registration, results data of the study and “stop advertising/publicizing such claims till the issue is duly examined”. The licensing authority of the Uttarakhand government has been requested to provide copies of licence and product approval details of the Ayurvedic medicines being claimed for the treatment of coronavirus infection, the ministry said in its statement.

It said such advertisements of drugs including Ayurvedic medicines are “regulated under the provisions of Drugs and Magic Remedies (Objectionable Advertisements) Act, 1954 and Rules thereunder and the directives issued by the central government in the wake of COVID outbreak”.

The ministry had on April 21 issued a notification stating the requirements and the manner in which research studies on COVID-19 with AYUSH interventions/ medicines should be undertaken.

The notification stated that at present there is no approved treatment for COVID-19 infection.

Indian traditional medicines have wide potential for usage in such conditions owing to their long-standing use in the community, a huge number of ancient references…at the same time it is also essential to have scientific evidence on the use of any Ayurveda, Unani, Siddha or Homeopathy formulation on prevention/ management of COVID-19, it had said.

According to the notification, there are no specific regulatory provisions in the Drugs and Cosmetics Rules, 1945, for conduct of clinical trials of Ayurveda, Siddha, Unani and Homeopathy drugs.

At the same time, it is also necessary that the clinical data generated is scientifically valid and credible.

In this context, the ministry has undertaken consultation with Drug Controller General of India (DCGI), Central Drugs Standard Control Organisation as well as other research experts.

While undertaking research, it is mandatory for the organisations to comply with certain conditions which include getting the proposal approved by their scientific advisory bodies and institutional ethics committees.

If it is clinical trial, the project should be registered with the Clinical Trials Registry- India (CTRI) and the sample size should be based on statistical justification.

“It would be mandatory to the institution/organisation to appraise the ministry of AYUSH, Government of India about the research developments as per research timeline and the outcome,” the notification read.

According to a June 2 directive, state licensing authorities or drug controllers concerned may take necessary action against all such instances of misleading information, fake claims and misbranding happening under their jurisdiction as per provision of the Drugs and Magic Remedies (Objectionable Advertisements) Act 1954 and Drugs and Cosmetics Act, 1940.

“A warning may be issued and if not complied in one week time, FIR may be filed in blatant cases of violations brought to the notice of the licensing authority/drug controller,” said a letter issued to the principal secretaries and secretaries (AYUSH/ Health) of all states and union territories.