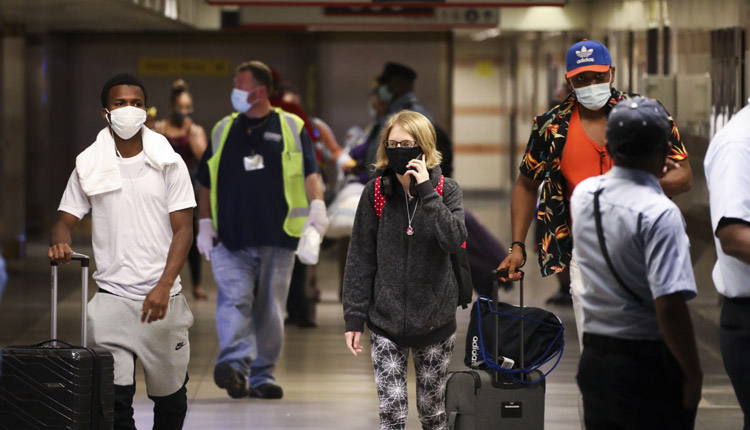 Washington: The overall number of global coronavirus cases has topped 19.2 million, while the deaths have increased to over 719,000, according to Johns Hopkins University.

As of Saturday morning, the total number of cases stood at 19,295,350 and the fatalities rose to 719,805, the University’s Center for Systems Science and Engineering (CSSE) revealed in its latest update.

The US accounted for the world’s highest number of infections and fatalities at 4,940,939 and 161,328, respectively, according to the CSSE.

The number of Covid-19 cases in the US surpassed 4.9 million on Friday, reaching 4,902,692, according to the Center for Systems Science and Engineering (CSSE) at Johns Hopkins University.

Meanwhile, the national death toll from the disease rose to 160,255, according to the CSSE, Xinhua reported.

States with over 180,000 cases also include Georgia, Illinois, New Jersey and Arizona, the CSSE data showed.

France has reported 2,288 new coronavirus cases in the last 24 hours, the biggest daily spike since the end of April. In the past week, France registered more than 9,330 new infections, bringing the country’s total number of confirmed Covid-19 cases to 197,921, the health ministry said on Friday.

Since May 9, when the French government started a gradual de-confinement, some 787 clusters have been detected, of which 288 remained active. Over the past 24 hours, 21 clusters were identified, the ministry said on Friday, Xinhua reported.

“The indicators are deteriorating, confirming a more active circulation of the virus throughout the territory, especially among young people,” the health ministry warned.

“We must strengthen vigilance, mobilise ourselves to respect barrier measures, common sense gestures in the fight against the Covid-19 epidemic,” it said.

As of Friday, the number of hospitalised Covid-19 patients fell by 49 to 5,011, continuing a downward trend of two and a half months.

Currently, 383 people needed intensive care, 7 fewer than the number on Thursday, while 12 additional coronavirus-related fatalities were recorded, bringing the total deaths to 30,324.

French scientists expected a second wave of the coronavirus could hit the country in autumn or winter as a result of social mixing and absence of distancing and barrier measures during the summer holidays, local media reported.

They asked French authorities to anticipate all the possible scenarios and prepare a prevention plan for the country’s most populated metropolitan areas, and to consider local lockdown according to the epidemic situation.

The two new patients are Chinese nationals who flew in from abroad, reports Xinhua news agency.

While one arrived in Shanghai from the US via France on August 3, the second person flew in from the United Arab Emirates three days later.

They were put under quarantine upon arrival and diagnosed as confirmed cases after showing symptoms, according to the commission.

All 103 close contacts of the patients on the same planes have been put under quarantine.

As of Friday, Shanghai had reported 424 confirmed imported cases and 342 locally transmitted cases.