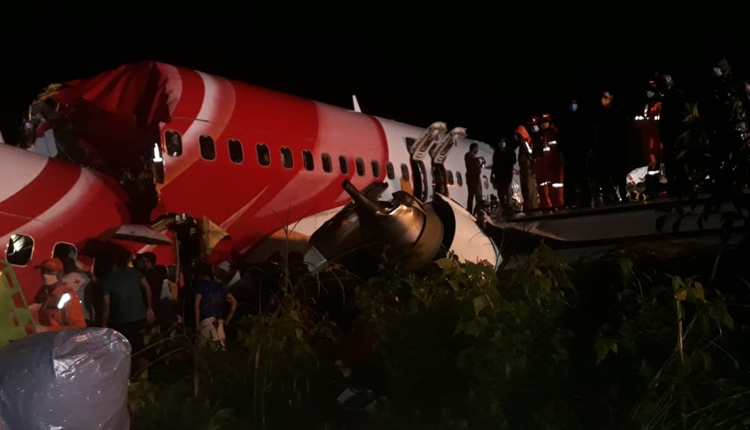 Kozhikode (Kerala)/New Delhi: Kerala Health Minister KK Shailaja asked all those who were involved in rescue operations at Kozhikode Airport to go into self-quarantine. Besides, the State Government has also decided to conduct COVID-19 tests of all the persons who assisted in the operation after the mishap.

Meanwhile, a team of the Directorate General of Civil Aviation (DGCA) investigating the crash of Air India Express aircraft at the Kozhikode airport recovered its black box today, officials said.

The black box records the conversation between the pilots as well as with the air traffic control tower, apart from the flight data.

According to aviation guidelines, the DGCA will conduct a detailed probe and identify the real cause of the accident.

In one of the worst air disasters witnessed in Kerala, the Air India Express flight, returning from Dubai under the Vande Bharat mission, crashed at the “table top” Kozhikode airport on Friday evening, leaving at least 18, of the 190 people aboard, dead including pilot, Capt D.V. Sathe and his co-pilot Akhilesh Kumar.

“18 people, including two pilots, have lost their lives, it is unfortunate. 127 people are at hospitals, others have been released,” informed Civil Aviation Minister, Hardeep Singh Puri.

#AirIndiaExpress flight crash: 18 people, including 2 pilots, have lost their lives, it is unfortunate. 127 people are at hospitals, others have been released. I am going to the airport (Kozhikode International Airport, Karipur): Hardeep Singh Puri, Civil Aviation Minister (ANI)

The plane skidded off the runaway as it landed on its second attempt amid heavy rain, plunged 35 feet into the valley below, and broke into two pieces.

Following the accident, which occurred at 7.41 p.m., the Kozhikode airport has been closed and the flights scheduled to land there have been diverted to Kannur airport, about 80 km away.

Expressing deep anguish over the incident, Civil Aviation Minister Hardeep Singh Puri said a formal enquiry will be conducted into the incident by the Aircraft Accident Investigation Bureau (AAIB).

Deeply anguished & distressed at the air accident in Kozhikode.

The @FlyWithIX flight number AXB-1344 on its way from Dubai to Kozhikode with 191 persons on board, overshot the runway in rainy conditions & went down 35 ft. into a slope before breaking up into two pieces.

Two investigation teams of professionals from @airindiain @AAI_Official & AAIB will leave for Kozhikode at 02.00 hrs & 05.00 hrs.

Everyone has now been rescued from the aircraft.

According to the Directorate General of Civil Aviation, Air India Express AXB1344, a B737 aircraft, with 190 people on board, landed on Runway 10 amid visibility of 2,000 metres in heavy rain, but overshot and nose-dived into the valley, breaking into two pieces.

Authorities in Kerala, however, said that there were 184 people – 128 men, 46 women and 10 children – on board, as five people who had a ticket did not board the aircraft.

According to the latest information collated from the various hospitals where the injured have been hospitalised, there are 123 who have been injured and the condition of 15 of them is serious.

Malappuram District Collector Gopalakrishnan said that the last of the two passengers inside the aircraft has been taken out.

Passenger Mohammed Ali, who lost his job in Dubai and was returning home with three of his friends, said that they were watching the beautiful sight of Kozhikode town when the aircraft was getting ready to land.

“But suddenly, we felt the aircraft was going up again. Surprisingly, there was no announcement. Then it circled for about 15 minutes…. and then everything happened in a jiffy… it came down and there was a noise. Soon, things came to a standstill and I managed to escape through the opening, landed on the wing and jumped off.

“Then my fear was will it go up in fire and hence, I ran. In the process, my leg and hip suffered an injury. I was one of the first people to be taken to a hospital. Am now waiting for the doctor to come to take me for a scan, as I have a pain. Otherwise, I am fine,” said Ali who hails from Koilandy in Kozhikode district.

Another passenger in the hospital, identifying himself as Riyaz, said that he was sitting in the back seats.

“I now am in no position to recall what happened, but there was a loud noise. I feel the pilot could not see the runway and hence, he took the plane up again and then came down,” he said.

An eyewitness on the ground said that he rushed to the spot on hearing the sound of the crash.

“We were a few people and we started to bang the airport gate, but the CISF personnel did not open it. We saw a fire engine and an ambulance arriving after which the CISF personnel asked for help and we rushed inside. We rescued the children first and assisted several others also,” he added.

State Health Minister K.K. Shailaja said that the condition of a mother and child was reported to be serious.

Minister of State for External Affairs V. Muraleedharan, who hails from the state, said the Karipur airport as it is known is a table top airport, and that was one reason why the plane plunged into the valley, causing its middle part to break open.

“Prime Minister Narendra Modi has spoken to Chief Minister Pinarayi Vijayan about it. Table top airports have a disadvantage during rainy seasons. Generally, during heavy rains, aircraft are not allowed to land at table top airports. All these things will come out in the DGCA probe,” said Muraleedharan.

Local legislator T.V. Ibrahim who was at a local hospital near the airport asked TV channels to beam the images of a young boy he was carrying in his arms as his parents were missing and to help the boy’s relatives in locating him at the Kondotty Relief Hospital.

According to information from the spot, the passengers sitting in the front rows of the plane had been seriously injured.