We are not happy with China: US Prez Donald Trump 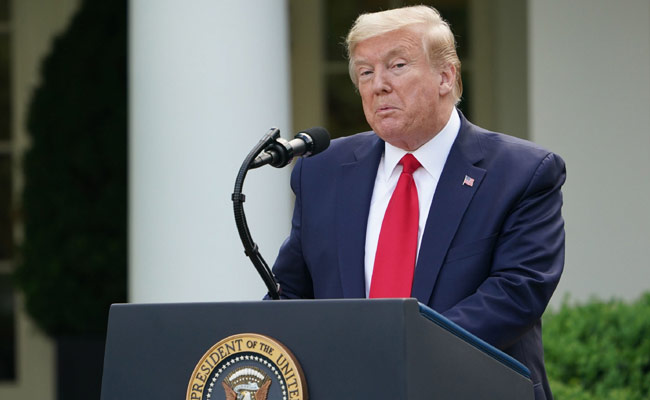 Washington: US President while addressing a news conference on coronavirus pandemic said his administration has launched “very serious investigations” into China’s response to the novel coronavirus.

Trump has been critical of China as the pandemic has progressed and has frequently touted his decision to close the US borders to China in an effort to curb the outbreak. Some health experts have said the effort bought time for the US to prepare, but the Trump administration has been accused of squandering the opportunity.

“Nobody except one country can be held accountable for what happened,” Trump said.

“Nobody’s blaming anybody here, we’re looking at a group of people that should’ve stopped it at the source.” The US will never forget those who were “sacrificed for a reason of incompetence or something else other than incompetence,” he added.

“They” – referring to China – “could’ve protected the whole world – not just us – the whole world,” he said. At the starting of the conference Trump said COVID-19 cases are declining or stablising across the country.

“In all cases getting better,” he said. “Really a horrible situation that we’ve been confronted with, but they’re moving along.”

He added there’s a “hunger” to get back to work.

The president has suggested an unnamed individual “a long time ago” could have stopped the “unnecessary death[s]” due to COVID-19. There has been so much unnecessary death in this country, he added.

He did not say who he was referencing and gave no other details.

Trump was asked if he has considered delaying the November presidential election.

“I never even thought of changing the date of the election,” he answered. “Why would I do that? November 3rd. That’s a good number.”

Trump called the suggestion “made up propaganda” and said that “sleepy Joe” Biden – his presumptive Democratic rival – was likely unaware his campaign had put the statement out.

Former Vice-President Joe Biden said at a virtual fundraiser last week that he thought Trump would “try to kick back the election somehow”.

The president has frequently levelled insults at his Democratic opponent by questioning the former vice-president’s mental fortitude.

“I look forward to that election,” Trump said.

The president responded to a question criticising Health Secretary Alex Azar’s early downplaying of the disease by saying it was “unfair”. He claimed Democrats did the same, including Speaker of the House of Representatives Nancy Pelosi.

“I was very fortunate through luck or whatever that we closed the border, we put a ban on China,” he said.

“But I could tell you that Nancy Pelosi was dancing in the streets in Chinatown. She wanted to go, let’s go out and party. That was late in February.”

Back in February, Pelosi had encouraged people to visit San Francisco’s Chinatown to help struggling businesses. She did not propose any parties, as the president suggested. The city issued a stay-at-home order in March.

A reporter asked: If an American president loses more Americans over the course of six weeks than died during the entirety of the Vietnam war, does he deserve to be reelected?

Trump took the question in stride.

“It’s far too many – one person is too many for this. I think we’ve made a lot of really good decisions,” he added. “The big decision was closing the border, doing the ban on people coming in from China.”

He also brings up the “unbelievable” job his administration did with ventilators.

“I think we’ve done a great job. And I will say this – one person is too many.”

The director general of the World Health Organization (WHO) has defended its handling of the coronavirus pandemic.

Tedros Adhanom Ghebreyesus said countries should have listened to the agency after it declared a “Public Health Emergency of International Concern” on 30 January, when there were 82 cases outside China and no deaths, the BBC reported on Monday.

“The world should have listened to WHO then, carefully,” he told reporters.

“We advised the whole world to implement a comprehensive public health approach, and we said: ‘Find, test, isolate, and do contact tracing’. You can check for yourselves: countries who followed that are in a better position than others.”

US President Donald Trump ordered the suspension of US funding to the agency after accusing it of “severely mismanaging and covering up the spread of the coronavirus”.