US will have COVID-19 vaccine by year’s end: US Prez Donald Trump 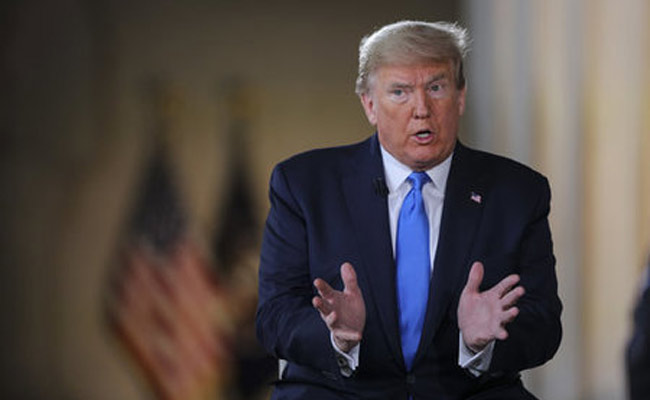 Washington: US President Donald Trump expressed confidence that the country would have a COVID-19 vaccine by the end of the year and revised the number of deaths due to the disease in America up to a minimum of 80,000.

So far, US government health experts had cited January 2021 as the earliest date for a coronavirus vaccine to be available.

“I’ll say what I think … I think we’re going to have a vaccine much sooner rather than later,” he said, without further clarifying.

Asked if he wanted the US to develop the vaccine before any other country, the President replied: “I don’t care, I just want to get a vaccine that works,” adding “if it’s another country I’ll take my hat off.

“We’re so far ahead of any vaccine ever in history.”

Trump also revised his prediction of the number of COVID-19 deaths in the US given that the estimate of 60,000 fatalities he had declared on April 20 has now crossed that mark.

Trump acknowledged that perhaps 90,000 deaths could not be called being “successful” in the fight against coronavirus but said it was preferable to the million or 2 million deaths there would have been without measures restricting movement.

The President also rejected media reports that he ignored several intelligence agencies’ warnings about the severity of the coronavirus in January and February.

He said that the country’s intelligence agencies will on Monday issue a statement backing his version that it was not until January 23 that they told him “there could be a virus coming in but it was of no real import”.

“It was a brief conversation and it was only on January 23. Shortly thereafter, I closed down the country to China and we had 21 people in the room. I was the only one that wanted to close it down,” he added.

He also claimed that Italy had been so badly affected by the pandemic because many Chinese who wanted to travel to the US went to Europe instead after he imposed travel restrictions on China on January 31 even though the Italian government had closed air traffic from China three days before that.

Trump’s “virtual” meeting with voters, who sent him video questions, was aimed at reinforcing the impression that the White House’s response to the coronavirus pandemic in the country has been effective, exactly six months before Trump goes up for re-election in November.

Sitting in front of the statue of Abraham Lincoln during the event, Trump said – in a reference to media – that he had been “treated worse” than the late President, who was assassinated in 1865.

Trump also claimed not to be concerned that the November presidential election would turn into a referendum on his management of the coronavirus crisis, saying that he has done a good job in leading the “biggest mobilization since World War II”.

He predicted a recovery by the economy next year with a “transition” in the third quarter of 2020 and a “good” fourth quarter and hoped to be able to resume his campaign rallies in the last two months before the November election.

Trump said that Americans should be able to return to work soon but added that those who were scared to do so could “stay back at home”.

The US currently accounts for the highest number of COVID-19 cases and deaths in the world.

SS Rajamouli’s Ramayan: Will The Director Repeat His ‘Baahubali’ Cast As Ram, Laxman, And Sita?