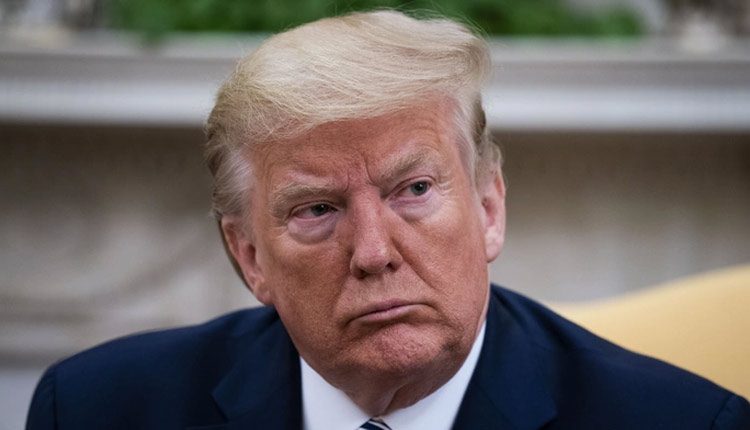 Washington: For the first time, Twitter put a warning label under two posts by Donald Trump, prompting the US president to accuse the popular social media platform of “interfering” in the presidential election scheduled in November.

Twitter highlighted two of Trump’s tweets on Tuesday that falsely claimed mail-in ballots would lead to widespread voter fraud in the elections, appending a message the social media giant has introduced recently to fight misinformation or unverified claims.

“There is NO WAY (ZERO!) that Main-in Ballots will be anything less than substantially fraudulent. Mail boxes will be robbed, ballots will be forged & even illegally printed out & fraudulently signed. The Governor of California is sending Ballots to millions of people, anyone…..,” Trump tweeted.

Twitter’s notification displays a blue exclamation mark underneath the two tweets, suggesting readers “get the facts about mail-in ballots”.

….living in the state, no matter who they are or how they got there, will get one. That will be followed up with professionals telling all of these people, many of whom have never even thought of voting before, how, and for whom, to vote. This will be a Rigged Election. No way!

Trump, who has some 80 million followers on Twitter, responded by tweeting again, saying the social media company “is completely stifling free speech”.

“Twitter is now interfering in the 2020 Presidential Election. They are saying my statement on Mail-In Ballots, which will lead to massive corruption and fraud, is incorrect, based on fact-checking by Fake News CNN and the Amazon Washington Post….,” a visibly upset Trump tweeted.

“Twitter is completely stifling FREE SPEECH, and I, as President, will not allow it to happen!” he said in another tweet.

….Twitter is completely stifling FREE SPEECH, and I, as President, will not allow it to happen!

Trump, a Republican, seeking reelection in the November 3 presidential election, has been tweeting several times about the mail-in ballots in recent days. He has been accusing California, Michigan and other states ruled by the Democrats of enabling voter fraud by distributing the mail-in ballots during the raging coronavirus pandemic in the country that has killed over 98,000 people and infected over 1.6 million people.

Twitter had pledged to increase the warning labels under false or misleading information on its platform – but it has been slow to take steps against the US president who has been using the site daily, even to sack his top officials. Trump has also used Twitter as a platform to pick fights with other politicians and celebrities.

“Twitter has placed a fact-checking warning on a tweet issued by President Trump in which he claims without evidence that mail-in ballots are fraudulent,” the National Public Radio reported.

Twitter spokesman Trenton Kennedy told the NPR that while the tweet about mail-in voting does not violate Twitter’s rules since “it does not directly try to dissuade people from voting,” it does contain “misleading information about the voting process, specifically mail-in ballots.”

The Trump Campaign alleged that Twitter was interfering with the president getting his message through to American voters.

“We always knew that Silicon Valley would pull out all the stops to obstruct and interfere with President Trump getting his message through to voters,” Brad Parscale, Trump 2020 campaign manager said.

“Partnering with the biased fake news media ‘fact checkers’ is only a smoke screen Twitter is using to try to lend their obvious political tactics some false credibility. There are many reasons the Trump campaign pulled all our advertising from Twitter months ago, and their clear political bias is one of them,” Parscale said in a statement.

In a recent opinion survey conducted by the Pew Research Center, 66 per cent of Americans said they would not be comfortable going to a polling place to cast their ballot during the current coronavirus outbreak.

Such public concerns have increased pressure on some states to expand the availability of mail-in ballots for all voters as part of the efforts to minimise the risk of viral exposure from in-person voting.