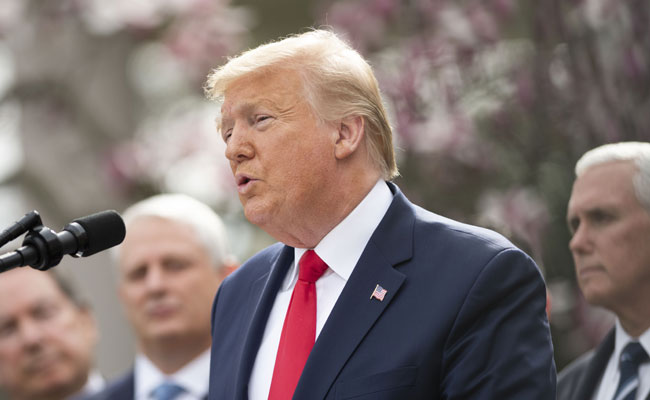 After the two of them tested positive, “I thought, you know, from my standpoint, not a bad time to take it, because we had the combination of those — the two people,” he said on Tuesday.

Trump has been criticised by Democratic Party leaders and some doctors for taking HCQ, which has been described in the media as a dangerous drug.

Chuck Schumer, the Democratic Party leader in the Senate, said Trump taking HCQ was “dangerous” and accused him of giving false hopes.

“But it seems to be an extra line of defence, and it’s gotten tremendous reviews from some people, including many, many doctors all over the world,” he added.

The Indian Council of Medical Research (ICMR) National Task Force on COVID-19 has recommended that healthcare workers and others caring for coronavirus patients use HCQ as a preventive.

While it has been used by millions around the world for decades to fight malaria and is commonplace, in the US the focus has been on the side effects of interference with heartbeats in some people.

Trump said, “It’s gotten a bad reputation only because I’m promoting it. So I’m obviously a very bad promoter. If anybody else were promoting it, they’d say, ‘This is the greatest thing ever’.”

Veterans Affairs (VA) Secretary Robert Wilkie pointed out that HCQ is widely used in the military.

“Those of us who’ve had a military life — some of us around this table — we’ve been taking this drug for years,” he said.

Both he and Trump disputed a study attributed in the media to the VA, the department that provides services for ex-servicepersons and runs a network of hospitals.

University of Virginia researcher Jayakrishna Ambati reported that the risk of death was found to be higher in ex-servicemen suffering from COVID-19 who were treated with it compared to those who were not.

Wilkes said, “That was not a VA study. Researchers took VA numbers and they did not clinically review them. They were not peer-reviewed.”

Trump added, “That was a phony study, and it’s very dangerous to do it.”

Some studies in France and elsewhere have shown positive results for the use of HCQ and several studies are underway in the US, India and elsewhere.

Trump had personally requested Prime Minister Narendra Modi to relax the ban on HCQ export and allow India to export doses ordered before the COVID-19 pandemic.

India agreed and sent the US 3.5 million tablets and nine tonnes of ingredients to manufacture it.