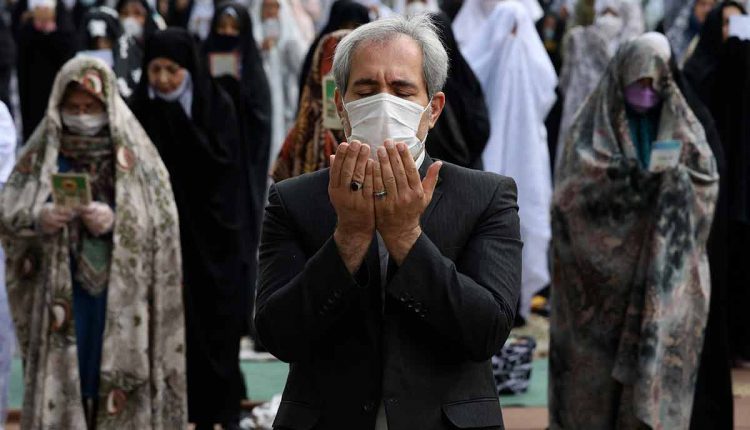 Tehran: Iranians held massive collective prayers on Sunday to celebrate Eid, amid social distancing measures including masks and gloves due to the COVID-19 pandemic.

Group prayers had been cancelled in the country for almost three months, although this restriction was recently lifted in low-risk areas and for special ceremonies, reports Efe news.

The faithful were also allowed to visit mosques on three important dates during the month of Ramzan, following sanitary protocols imposed by the authorities.

Those who went to religious centres to celebrate Eid wore masks and gloves and placed their prayer mats at a minimum distance from each other to help prevent the spread of the virus.

Hundreds of people gathered at the Bagh-e-Feyz mosque in Tehran, happy to be able to participate in collective prayer again after so long.

Some were still fearful of the contagion and not all the city’s mosques held ceremonies, notably including the Grand Mosalla mosque which cancelled prayers which would have been led by Iran’s supreme leader Ali Khamenei.

Prayers at Bagh-e-Feyz were held outdoors in a large street in front of the building, something that is customary during Eid celebrations every year to accommodate the huge crowds that gather.

Despite the fact that new daily infections remain high, another 1,869 cases were detected on Saturday, Iranian authorities have said the disease is contained and have eased a large part of the restrictions imposed.

Religious and cultural centres will reopen throughout the country after Eid celebrations, although with time limitations in a bid to avoid a resurgence of infections.

Museums, historical buildings and tourist sites have also reopened and all workers must return to their jobs from Saturday.

President Hassan Rouhani announced the reopening in a televised statement on Saturday.

He said last week that restaurants would reopen and sporting events resume after Ramzan.

No scientific evidence yet to prove ‘Herd immunity’ against COVID-19: Lancet