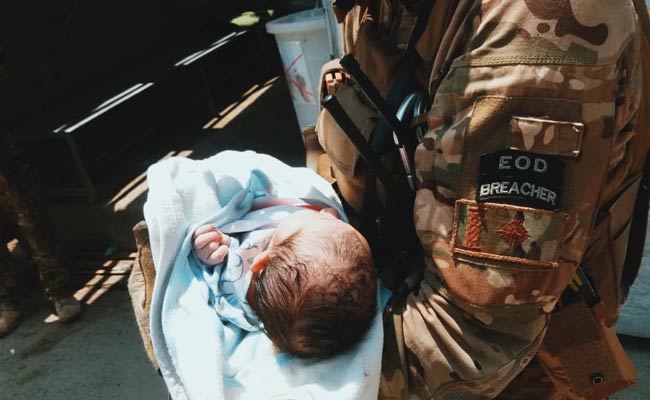 Kabul: Gunmen stormed a maternity hospital in the western part of Kabul on Tuesday, setting off a firefight with the police, officials said. Afghan forces carried out newborn babies and their mothers as they evacuated the hospital, and at least four people were reported wounded.

Elsewhere in Afghanistan, a suicide bomber targeted a funeral in eastern Nangarhar province a hotbed of the Islamic State group on Tuesday, killing 10 people and wounding at least 30.

No one immediately claimed responsibility for the Kabul attack but both the Taliban and the IS are active in the Afghan capital and its surroundings, and both frequently target the military and security forces, as well as civilians.

The Taliban later denied they were involved.

In Kabul, black smoke rose into the sky over the hospital in the city’s Dashti Barchi, a mostly Shiite neighborhood that has been the site of many past attacks by Islamic State militants. Interior Ministry spokesman Tareq Arian said that over 80 women and babies were evacuated by Afghan security forces as the firefight got underway.

Photos shared by the ministry show newborn babies and their mothers being carried out of the hospital. The forces are trying to eliminate the terrorists and bring the situation under control, said Arian. He later added that at least one of the attackers was shot dead.

Wahid Majroh, deputy public health minister, rushed to the site from where he said at least four people were wounded. It was unclear why the hospital in Dashti Barchi, a 100-bed facility, was targeted.

In the attack in the eastern Nangarhar province, Attahullah Khogyani, spokesman for the provincial governor, said the suicide bomber targeted a funeral ceremony in Khewa district for a local pro-government militia commander who had died of a heart attack on Monday night.

The bomber struck as mourners had gathered, killing at least 10 and wounding 30, Khogyani said.

Taliban spokesman Zabiullah Mujahid later tweeted that the Taliban were not involved in either the Kabul or the Nangarhar attack.

The IS, meanwhile, claimed it was behind a spate of attacks on Monday in Kabul when four bombs, one placed under a garbage bin and the other three by the roadside, went off in the northern part of the city, wounding four civilians, including a child.

The Afghan intelligence service said in a statement later Monday that the agency has arrested an IS leader in the region, Zia-ul Haq, also known as Shaikh Abu Omer Al-Khorasani.

India strongly condemned separate terror attacks targeting a maternity hospital, a funeral and a military check post in Afghanistan, calling them “barbaric” acts against innocent people including women and children.

Militants attacked a maternity hospital in Kabul on Tuesday, killing 14 people, including two newborn babies and their mothers.

In a separate attack, a suicide bomber targeted a funeral ceremony in Nangahar province, a hotbed of the Islamic State group, killing at least 24 people and injuring 68.

“India strongly condemns the barbaric terrorist attacks against innocent civilians, including women and children, at the Dasht-e-Barchi hospital maternity ward, funeral in Nangarhar province and the Army check post in Laghman province,” the MEA said.

In a statement, it said the “reprehensible” attacks, including on mothers, newly born children, nurses and mourning families are appalling and constitute crimes against humanity.

“We extend our sincerest condolences to the families of the deceased and wish speedy recovery to those injured,” the MEA said.

It said there can be no justification for such continued acts of terrorism, asserting that the perpetrators of such heinous acts and their sponsors should be held accountable and brought to justice.

“They should be forced to eradicate safe havens and sanctuaries that have abetted terrorism in the region for decades and caused immense miseries to untold number of people in the region,” the MEA said.

It said India stands in solidarity with the people, government and security forces of Afghanistan in their efforts to bring peace and stability to the nation.

“The holy month of Ramazan should be a period of fasting, prayer and reflection,” the MEA said.

“We call for an immediate cessation of terrorist violence and cooperation to deal with the humanitarian situation arising from the spread of coronavirus in Afghanistan,” it added.

Fiscal Package To Be Around Rs 10.71 Lakh Crore