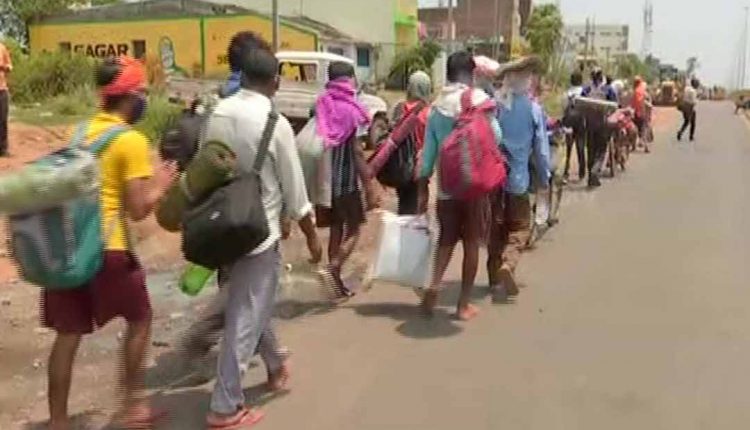 The exponential growth of Corona positive cases in the state over the last few days has expectedly raised an outcry against the government decision to bring back lakhs of migrant workers from Odisha stranded in big cities in other states due to the nationwide lockdown that has already lasted more than a month and half. But this columnist is still of the view that allowing them to come back to their home state was the right decision despite the rapid rise in the number of positive cases in our state.

Firstly, given the desperate and precarious conditions these migrant workers were living in at their place of work, there was no way the government could have forced them to stay put and stopped them from sneaking into the state any which way. The spurt in cases in Jajpur, Bhadrak and Balasore underlines the sheer hopelessness of plugging all the entry points from the West Bengal side. Bereft of livelihood, food, shelter – and, most importantly, hope – in an unfriendly city, lakhs of them can be seen on a daily basis attempting the near impossible by walking hundreds of kilometres back to their homes. If India has failed to stop infiltration of civilians from Bangladesh and of terrorists from Pakistan despite the extraordinary security measures put in place at the borders – and their geopolitical implications – it is highly unrealistic to expect the state police to effectively man all possible entry points into the state from all sides. There is also the sea route that requires round the clock surveillance. And unlike in the two cases cited, these are our own people, not foreigners illegally entering the country. So even if some of them were caught while sneaking in, the police can’t shoot at them.

Against this backdrop, it is certainly better to bring them back in an organized way and put them up on quarantine for the mandated period rather than allow them a free run – something that could have proved disastrous. (It must, however, be said the decision to bring back the first few hundred migrant workers from Surat was an ill-advised move. But to the state government’s credit, it was quick to realize its folly – and the damage potential – and decide that all migrants would return only through train.) If the migrants returned on their own, they would have gone straight to their homes and the infected among them would have endangered the lives of their family members and other villagers. While it is true that the quarantine facilities are not foolproof and the restrictions are being violated with impunity at many of them, this is still a better option than allowing the incoming crowd to mingle freely with others.

The concerns being expressed in various quarters about the number of cases going through the roof after the migrants started coming back (Ganjam, for example, has gone from 0 to 112 in one week flat!) are on expected lines. But the crucial fact often lost sight of by those concerned is that they are all being brought back and put up under regulated conditions. Their arrival may have taken the number of positive cases in our state from a healthy 112 to 372 in less than a week. But forcing them to stay put where they were would have been far worse for two reasons. First, they would have been detected – and treated – much later, multiplying the threat of spreading the disease manifold. Second, while we in Odisha would have patted ourselves on our backs for keeping the numbers small, they would have shown up in the country’s numbers –along with several hundred others in all probability – anyway. This is a national crisis and there is no room for such narrow, parochial considerations in fighting the menace. Apart from the practical considerations, there is a human side to it as well. After all, they are our own people, forced to migrate outside the state because we could not provide them jobs here. If we abandon them in this hour of crisis, would the states where they stayed have looked after them better?

Much of the anger we see among the more fortunate is, in fact, the reaction to a few stray cases of inmates violating the restrictions in place at the quarantine facilities – incidents like over a hundred of them leaving two centres in Ganjam complaining about poor food and an unruly group in Tihidi singing and dancing throwing caution to the winds – and, worse still – shooting a TikTok video and posting it on social media. But these stray cases cannot take away from the fact bringing back the migrants was the right way to go about it.

Rather than crib about the decision to allow them in, the need of the hour is to focus attention on improving the facilities and plugging the loopholes at the quarantine centres: ensuring tighter security so as not to allow inmates to roam freely (or slip into their homes at night, as reported in some places) or requisition food from their homes, stricter enforcement of social distancing and hygiene and extensive tests to identify positive cases.