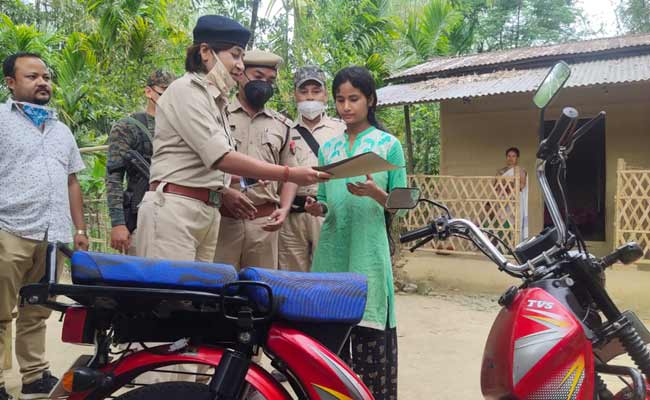 Dibrugarh: Assam Police has gifted a two-wheeler to a 20-year-old woman of Dibrugarh district, who has been selling vegetables door to door on a bicycle to back her parents during the ongoing lockdown.

A photograph of Janmoni Gogoi, with large bags hanging from the handle of her bicycle and a basket on its carrier, selling vegetables has gone viral on social media.

After studying till class 12, Janmoni used to help her mother sell vegetables in a market to run their family that included her ailing father. She is the only child of her parents.

“My father has been ailing for the past 18 years. He cannot walk. My mother sells vegetables in Borbaruah market. I have been helping her for two years,” said Janmoni, who lives in a village in Bogibeel area of Dibrugarh district.

After the nationwide lockdown was imposed on March 25, she started selling vegetables door to door carrying her wares on a bicycle as it was not possible to go to Borbaruah market.

Top officers of the Assam police, including SP Srijith T, came to know about her from mainstream and social media and asked her if she needed any help.

“Her self-respect prevented her from taking monetary help. So we came up with the idea of gifting her a two-wheeler so that she can carry her vegetables more comfortably and in larger quantities,” Deputy Superintendent of Police Pallavi Mazumder said.

Handing her over the two-wheeler on Monday, Mazumder said, “At a time when everyone is indoors, Janmoni came out to support her family.”

Janmoni, who nurtures a dream of pursuing higher education, expressed her gratitude to the state police, the SP and the DSP.

“I earn a meagre amount by selling vegetables.

Sometimes I have to return home without earning anything. The two-wheeler will ease my problem of ferrying vegetables far. I am now determined to work harder,” she said.

Her mother Monomoti said, “If my daughter did not sell vegetables on a bicycle, it would have been tough for us to sustain during the lockdown period.

Resumption Of Flights: Passengers Above 80 Yrs May Be Barred, Ministry To Issue SOP