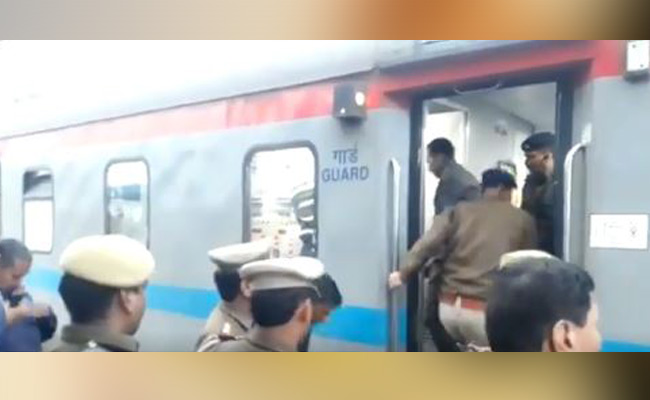 New Delhi: A tweet from a passenger claiming that there were five bombs in the New Delhi-Dibrugarh Rajdhani Express sent security forces into a tizzy and delayed the train, but the claim turned out to be a hoax, the railways said Friday.

The passenger, who identifies himself as Sanjeev Singh Gurjar on Twitter, wrote on the social media site that there were five bombs on the train, prompting the authorities to halt it at Dadri near here to launch security procedures.

He tagged the Railway Ministry, Union Minister Piyush Goyal, the Delhi Police and the IRCTC in his tweet.

“I want to inform that there are 5 bombs in a train rajdhani(12424) going from new delhi to kanpur central. Please take some action on this quickly. @RailMinIndia @PiyushGoyal @DelhiPolice @IRCTCofficial,” tweeted Sanjeev Singh Gurjar, a passenger.

I want to inform that there are 5 bombs in a train rajdhani(12424) going from new delhi to kanpur central. Please take some action on this quickly.@RailMinIndia @PiyushGoyal @DelhiPolice @IRCTCofficial

Responding to the tweet, the Superintendent of Government Railway Police, Agra, wrote from its official handle, “Regarding the above information, all the senior officers have been made aware that the train is being stopped at the post GRP Dadri and is being checked with the joint efforts of RPF and GRP,” it said in a tweet.

It begins its journey at 4.10 PM from Delhi and arrives at the destination at 7.00 am.

Government Railway Police and Railway Protection Force personnel were pressed into service and they conducted extensive searches on the train which inconvenienced the passengers.

A railway spokesperson said appropriate action will be taken against the person for his claim.

The passenger posted his second tweet around at 7.16 PM, this time in Hindi, “I made that tweet under mental stress. My brother’s train was delayed by over four hours and I was very angry about it. I want to apologise to the government.”

He tagged the Railway Ministry and Minister Piyush Goyal in the second tweet.

“Investigation started by the railways’ IT cell and appropriate action will taken,” the railway spokesperson said.

Ollywood Actors Sabsasachi & Archita To Tie The Knot At…

Odisha: Temperature To Rise By 3-4 Degree Celsius In Next…