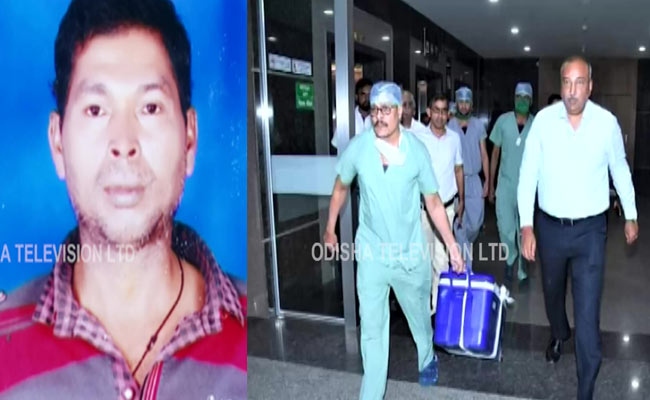 Surat: A 49-year-old man from Odisha staying in Surat, who was recently declared brain-dead by the doctors at Kiran Hospital here, has given a new lease of life to six persons.

Bipin Pradhan, a resident of Bhatapada village under Kabisuryanagar block of Ganjan district was reportedly working as a supervisor in a weaving unit at Bhestan in Surat city.

On March 9, Pradhan complained of ill health and was immediately rushed to a private hospital. Later, after a CT scan examination revealed bleeding in his brain, doctors referred him to Kiran Hospital on March 11.

On March 13, he was declared brain-dead by the doctors at Kiran Hospital. Subsequently, the doctors and Surat’s Pravasi Odisha Samaj informed Donate Life, an NGO working for organ donation about his death. After counselling, Pradhan’s family members decided to donate his vital organs.

After an agreement by Pradhan’s family members, a team of doctors from Institute of Kidney Diseases and Research Centre (IKDRC) in Ahmedabad rushed Kiran Hospital and retrieved his two kidneys and liver. His eyes were donated to Lokdrashti Eye Bank, said reports.

Narrating about the noble initiative, Muna, Pradhan’s elder son said, “I could not save my father and was helpless. However, his organs have given new life to many people and we are proud of it,” said a sobbing.

President of Pravasi Odisha Samaj, an organisation of Non-resident Odias, Pradeep Sahu said, “Pradhan suffered brain haemorrhage due to high blood pressure and was declared brain-dead. After his family agreed to donate his organs, his heart, liver, kidneys and eyes were donated to six persons. Though he is dead, he has become immortal for us now.”

Similarly, Pradhan’s heart was taken to Sir H.N Reliance Foundation Hospital in Mumbai and transplanted into a 56-year-old woman on Friday.

“After Pradhan was declared brain-dead, his family members contacted us through the Prabasi Odisha Samaj and urged for the organ donation. Accordingly, a team of experts from Institute of Kidney Diseases and Research Centre, Ahmedabad went to Kiran Hospital and retrieved his kidneys and liver. Similarly, his heart was transplanted into a woman in Mumbai,” informed Donate Life founder, Nilesh Mandlewala.

“Heart transplant has to be done within four hours after it is retrieved from the donor’s body. For this, a green corridor was created from Kiran Hospital hospital to Surat airport and then the heart was transported via a chartered plane to the Mumbai airport from where the organ was taken to Sir H.N Reliance Foundation Hospital for the transplantation. A distance of 298 kilometres was covered in only 100 minutes,” added Mandlewala.

Pradhan’s two kidneys were transplanted into a 46-year-old woman while the recipient of liver was a 50-year-old man. Both the transplantation were carried out at IKDRC, added reports.

Pradhan’s last rites were conducted by his family members in his native village on Saturday. He is survived by his wife Renu and two sons- Muna and Kuna.

Odisha Fights Coronavirus: CM Extends Date For Registration Of All Passengers From Abroad Till Apr 15