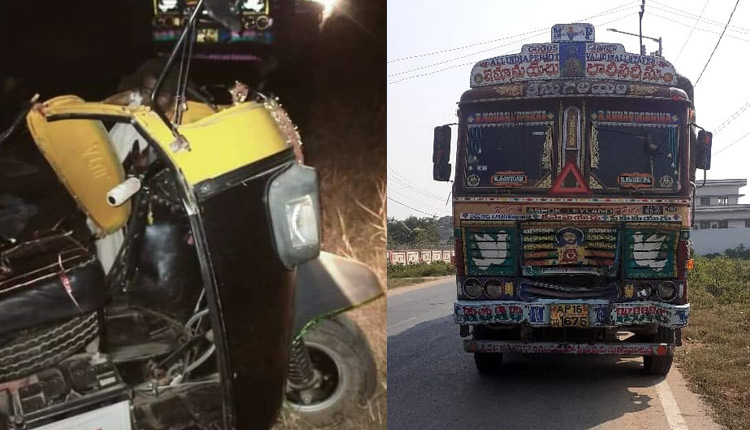 Bolangir: At least three persons were killed and eight others sustained injuries in two separate road accidents in Odisha on Sunday.

Three persons were killed following a head-on collision between a truck and an auto-rickshaw near Sarsara Chhak on Bargarh-Barpalli road. The identity of the three deceased could not be ascertained till the latest reports were filed.

According to reports, the auto rickshaw was heading towards Bargarh from Bolangir when it slammed into a truck, coming from Bargarh near Sarsara.

Police rushed to the spot after receiving information about the mishap from the locals. The casualties were immediately shifted to the District Headquarter Hospital (DHH).

However, three of them were declared brought dead by the doctors at the headquarters hospital. Police have launched a probe into the incident after sending the bodies for post-mortem.

In another mishap, as many as eight persons sustained injuries, after a vegetable-laden auto-rickshaw overturned near Puturikhaman on Hatibari- Kuarmunda Road in Sundargarh district on Sunday.

Some of them were admitted to nearby community health centre while four critically wounded were shifted to Rourkela Government Hospital for intensive care.

A team of Kuarmunda Police reached the spot with forensic officials to probe and ascertain the exact reason and circumstances of the accident.

The rise in the number of road accidents in Odisha recently comes along with the full-fledged reopening of the economy after months of lockdown restrictions.

Despite intensified campaigns to spread traffic awareness among the citizens of Odisha, data reveals that there is no significant change in the overall scenario.

As per the National Crime Records Bureau (NCRB) report, the number of road accidents in Odisha recorded a rise of 2.1 percent in 2018.

The State also topped in the country for registering highest rate of hit and run cases as revealed by NCRB data.