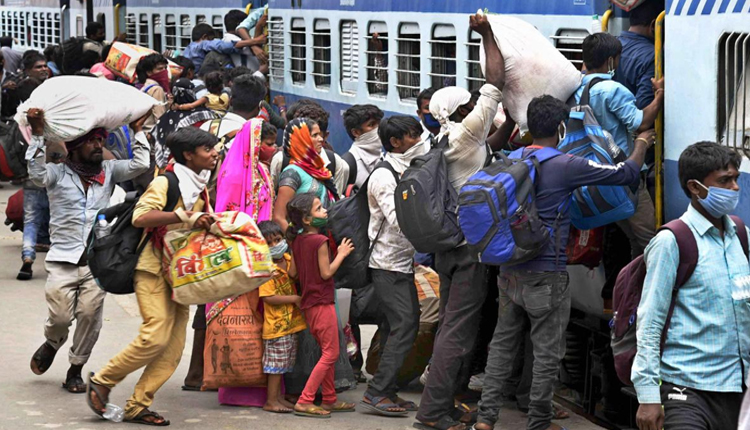 Bhubaneswar: Union Minister Dharmendra Pradhan has requested Railway Minister Piyush Goyal to start Shramik special trains from Odisha to states like Gujarat, Karnataka and Maharashtra so that the migrant workers can go back to their workplaces smoothly amid the resumption of normalcy and lifting of nation-wide lockdown imposed in the country since March due to the outbreak of Covid-19.

In his letter to the Railway Minister, Pradhan said that he has received a number of requests from migrant workers in Odisha who have urged that train services be started from Odisha so that they can reach their workplace.

“There was a mass exodus of migrant workers from States like Gujarat, Karnataka and Maharashtra to Odisha in the wake of nation-wide Covid-19 lockdown. With the efforts of your Ministry, thousands of workers across the country could reach their home towns by Shramik Special Trains and the same was appreciated widely,” wrote Pradhan in the letter.

Highlighting that as the Centre has lifted the nation-wide lockdown, there is a need to resume rail services for migrant workers to go back to their workplaces.

“Keeping in mind the need to re-ignite our economy and the plight of migrant workers in Odisha who are in urgent need of livelihood, I request your personal intervention for restarting of Shramik Special Trains from Odisha to States like Gujarat, Karnataka and Maharashtra at earliest,” added Pradhan.

Railway Board Chairman V K Yadav had said that more than 4,600 Shramik Special trains have been run since May 1, ferrying over 63 lakh people home during the coronavirus lockdown.

In a recent media briefing, Yadav also said that of the 230 trains that are currently being operated, the ones that are running on reverse route of Shramik Special trains was around 80-85 per cent, indicating that migrant workers were returning to their workplaces.

Sources in the Railways said the national transporter is not keen to operate more Shramik Special trains, but will run more regular trains on demand from Odisha. No other state has asked for such trains yet.

The Railways recently announced 80 additional special trains which will be run from September 12. This will be in addition to the 230 trains which are currently in operation.

“In addition to the 40 pairs announced recently, more regular trains are expected to be run from Odisha to meet the demand,” an official said.

Worth mentioning, the Railways suspended operation of its trains following the nationwide lockdown from March 25. The Railways then subsequently started operating Shramik Special trains from May 1 to transport stranded migrant workers, pilgrims, students and tourists.

The Railways launched 15 pairs of special air-Conditioned trains from May 12 and 100 pairs of time-tabled special trains from June 1.

PUBG ban in India: PUBG Corporation To Drop Tencent Games As Its Authorized Franchise In India